Spring is here! It is time to get outdoors. For the past few weeks I have been knitting a sweater suitable for this purpose. This is because, with the notable exception of garments made by the wonderful New Zealand company, icebreaker, I loathe and despise “outdoor wear.” It is generally pricey, usually ugly, and tends to be made of hideous synthetic fibres. It is not that I don’t appreciate the superb functionality of these items. I own a fleece and a goretex shell. But I am also someone who actually likes clothes. How can I wear pants that have a waistline higher than Simon Cowell’s and make me arse look huge? So what if they are made of quick-drying lightweight superstuff, zip off at the knee, and niftily double as shorts? That’s just a pant too far.

OK, I admit it: I actually own and wear such pants. But in them I feel that my identity is being sapped away, as if I were in the garb of some repressive institution. The problem is not just that I am (to my shame) a terrible style snob, but that outdoor clothing is still a predominantly masculine affair. These clothes are just not often designed with women primarily in mind. In the world of outdoor wear, its assumed that women want a top that was originally designed for a feller, but that is usefully coded ‘feminine.’ This usually means that it is pink, mauve, or covered in gaudy floral swirls. But I do not want to wear a floral nylon baselayer, however brilliant its wicking properties. Frankly, I’d rather have a navy one just like the blokes. 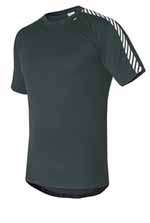 But I can’t wear what the men wear. And I am actually rather jealous. For there is both an ease and a definite identity associated with men’s outdoor wear (particularly here in Scotland). Blokes in the hills tend to wear exactly the same things. I mean exactly. These garments are worn primarily because they are tried, tested, durable, and reliable. But they are also signs of seriousness and badges of belonging: they are a uniform. I have seen the way that men look at each other at races and on mountains. While the man who sports expensive gear and the latest hi-tech item may be sneered at as a novice, a man wearing The Uniform will greet another as his brother. For the uninitiated, the four essential components of The Uniform are 1) Helly Hansen baselayer, usually in blue with white flash. 2) Ron Hill tracksters, usually navy with red stripe. 3) KIMM (now OMM) sack. Usually in yellow/black; 4) (if running) a pair of yellow/blue walshes. 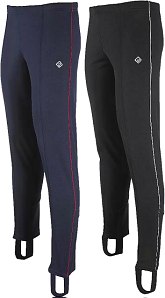 The Uniform really is a predominantly masculine affair. This is due to the obvious fact that men outnumber women in the hills by at least five to one, but is also because a woman of short height and small frame will be frustrated in her efforts to acquire some of the essential items. She might easily find a ‘ladies fit’ pink helly or ronsters with a pale green stripe. But who wants that? The Uniform this is not.

Anyway, as I began by saying: I have knitted myself an outdoor sweater. In my stash I had several balls of navy cashmerino aran that I bought back in 2005. At 33% microfibre, this stuff is almost a fleece already and eminently suitable for a light and warm outdoor sweater. I liked the matelot-like feel, the shape of the neck, and the workman’s pockets on kaari, a Norah Gaughan sweater from her first Berocco book. The versions I saw on ravelry were lovely, but the fit seemed quite big, so I knit the cashmerino on 4 and 4.5mm needles, also attempting to reduce the pilling associated with this yarn. Its a satisfying, simple pattern and knit up very quickly. I finished seaming it last week, and over the bank holiday, wore it walking in North Antrim. 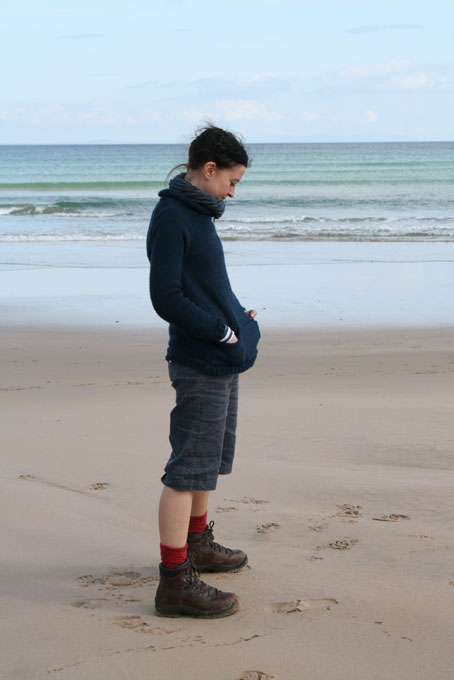 (note: monkey socks above the boots) 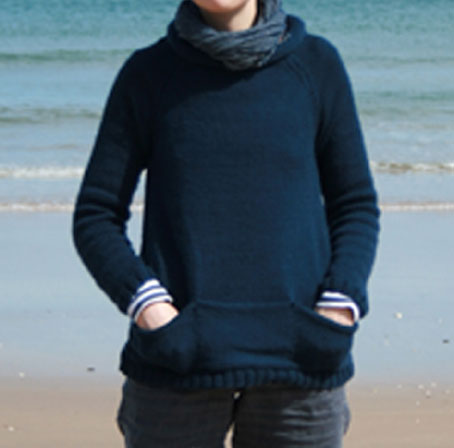 . . . and here’s a shot of the almost boat-shaped rollover neck, which I like very much indeed: 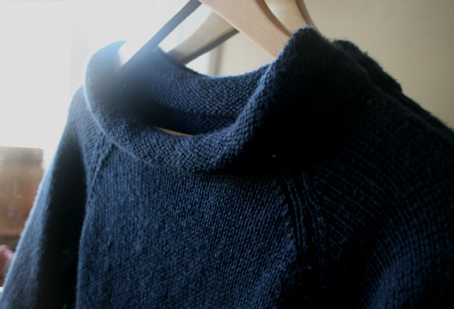 To my mind, this is an ideal outdoor sweater. It is very soft and luxe; has a pleasing fisherman’s sweater look and is also completely functional. It was cosy in the wind, but packed up small and light when the sun came out. It also doubled as my pillow in the tent at night. I wore it solidly for five days and so far it is wearing very well. Mr B (a traitor to The Uniform) observed it with envy and now wants one for himself. He likes the pockets. It is Ravelled here.