A conversation the other day about the stereotypes associated with women and knitting in film got me thinking about Double Indemnity (which I’ve watched repeatedly . . .almost as many times as 3 Days of the Condor). There is just one reference to knitting, but it is a good one. For those of you who haven’t come across it, here it is. Canny insurance salesman, Walter Neff, is about to be trapped in the homicidal web of cold, conniving, Phyllis Dietrichson, caught on the twin promise of a superlative blonde and the thrill of creating the perfect crime. Phyllis entangles Neff by explaining her need for an escape route from her loveless marriage: 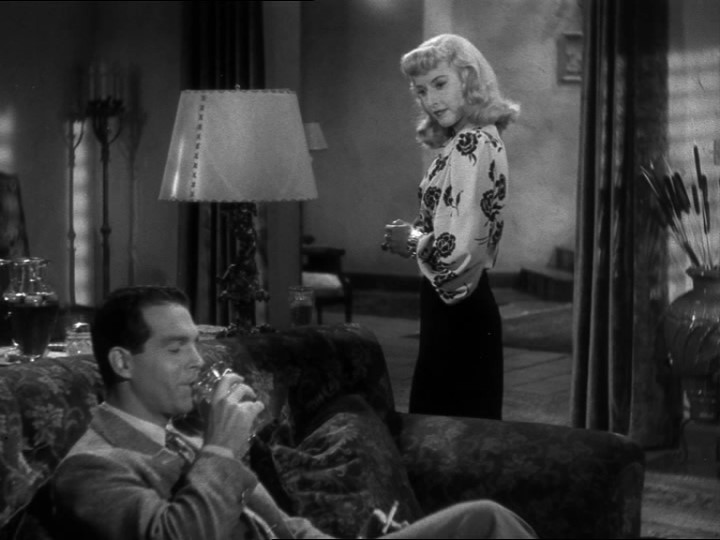 Phyllis: Sometimes we sit here all evening and never say a word to each other.
Walter: Sounds pretty dull.
Phyllis: So I just sit and knit.
Walter: Is that what you married him for?
Phyllis: Maybe I like the way his thumbs hold up the wool.
Walter: Anytime his thumbs get tired . . . Only with me around, you wouldn’t have to knit.
Phyllis: Wouldn’t I?
Walter: You bet your life you wouldn’t.

I think I probably used to read that exchange from Neff’s normative and masculine point of view: that is, there’s no way that Barbara Stanwyck (who plays Phyllis with tremendous, bristling, icy allure) should ever be knitting. Knitting? With that anklet? For Neff, knitting points to her domestic entrapment and her lack of sexual fulfilment. His thumbs would hold her wool up so much better. But what he, and the audience fail to get at this point in the film, is just how perfect and appropriate an activity knitting is for Phyllis Dietrichson. In fact, far from suggesting her stifling confinement, it hints at what we later discover—her terrifying sexual autonomy. In this context–that of the powerful, sexually controlling femme fatale–knitting is about plotting, scheming, planning—and it is also about a certain creative (albeit malignant) independence. So, in fact, Phyllis doesn’t need any bloke’s thumbs to hold up her wool. She’s more interested in how she can wind them round her fingers.

Just look at Stanwyck’s restless and incredibly sexy fingers in this still. She’s quite obviously a knitter! 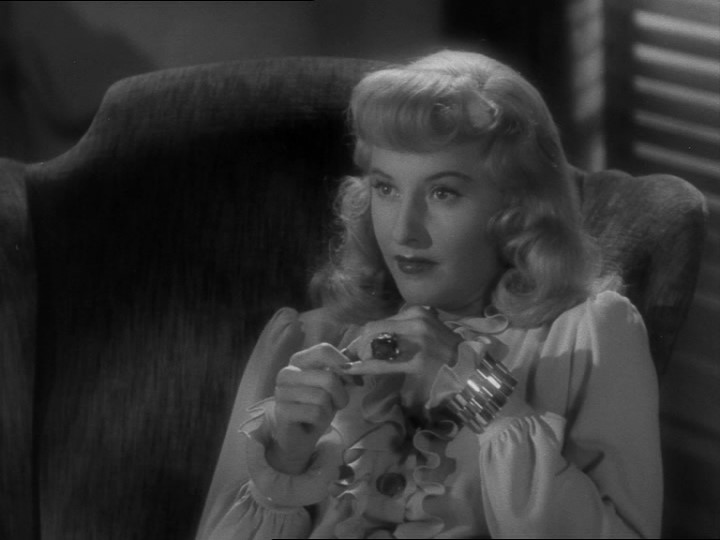 Hmm. Does anyone know of any good articles on the knitting femme fatale?