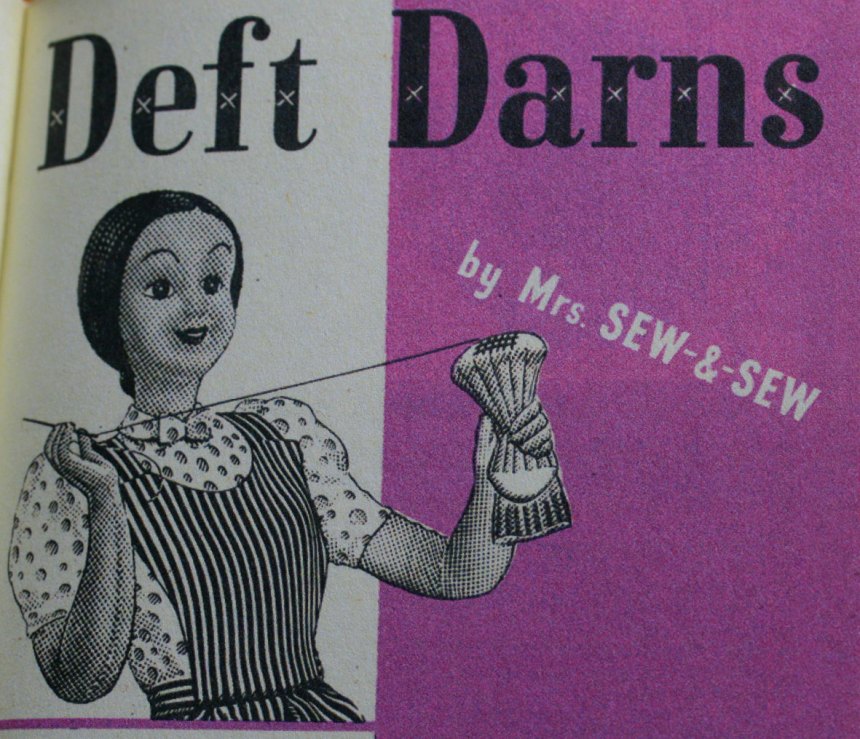 Since my sister bought me this book a while ago, I have taken all my darning advice from Mrs Sew and Sew — the fictional character invented by the British Board of Trade to promote practices of mending and making do. When considering war-time rations, we perhaps first think of food and fuel, but clothes and textiles rationing was introduced in 1941 and continued until 1949. The clothing allowance, which enabled each person to acquire what was thought of as the equivalent of one full outfit, began at sixty-six coupons per year, and was later cut as low as twenty. Children’s clothes carried a lower coupon value (to allow for fast-growing kids), and rations covered fabric and notions as well as finished garments. All garments were carefully itemised and valued. For example:
“Bolero, short jacket, short cape. If woollen or leather and with sleeves of not less than elbow length — 5 coupons. If not woollen or leather and with no sleeves or with sleeves of less than elbow length — 2 coupons” (Clothing Coupon Quiz (British Board of Trade, 1941) 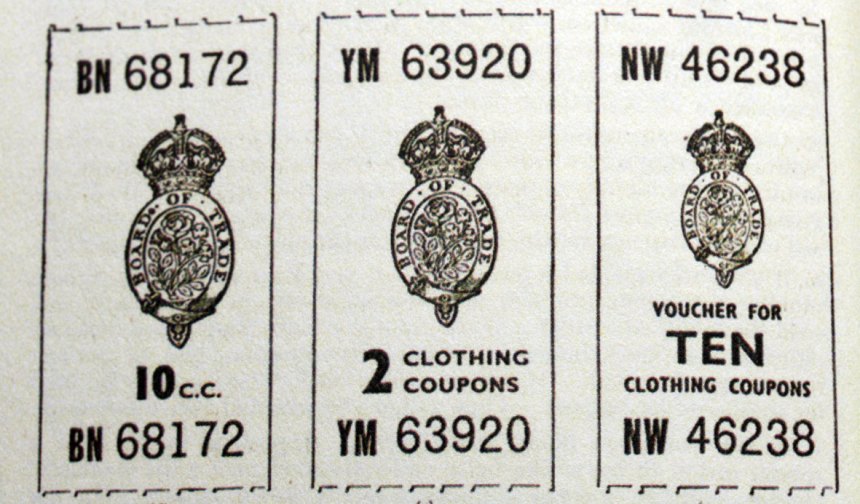 (emergency clothing coupons like these were issued in special circumstances — such as when property had been destroyed by bombing).

At a time when a couple of yards of elastic might cost you a valuable coupon, the care and repair of clothes became paramount, and to encourage such thrifty practices, the Board of Trade and Ministry of Information invented the persona of Mrs Sew and Sew. In a series of pithy pamphlets (which you can still read today) Mrs Sew and Sew issued clear and constructive advice on all textile-related matters, from dressmaking with parachute nylon to recycling a worn rug into a pair of warm slippers. I love Mrs Sew and Sew’s pamphlets and often make use of them: her instructions on how to darn a sock really are the best and clearest I’ve read anywhere. 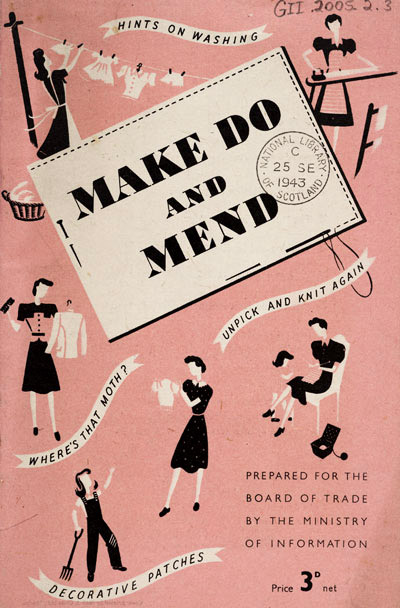 I was intrigued to discover that, with the support of the lovely people at the Imperial War Museum, Mrs Sew and Sew was, through the wonder of Twitter, once again dispensing her words of thrifty wisdom to the nation. In her witty missives, the home-front has been speaking to the twenty-first century in a variety of very interesting ways. I recommend signing up to follow her tweets and those of the IWM right away! While much has been made by other crafty commentators of how the 1940s dictum of “make do and mend” speaks to that discourse of thrift that has such a particular national currency right now, I would like to stress that Mrs Sew and Sew and her tweets are entirely free from political bias (by which I mean that she has in no way associated herself with the new-tory language of thrift or (God forbid) that of the Conservative Party’s celebrity housing advisor). In 1943, fuel rationing would not allow for a gigantic 4 x 4 in which to carry home your skip-pilfered furniture; nor would a jolly team of builders be available to renovate your derelict Devon home. And while I can’t speak for her, I’m pretty sure that Mrs Sew and Sew would not recommend doing the decorating in your best Cath Kidston frock. Do bear that in mind, Kirstie.

Anyway, its time for me to stop wittering on, and bring you a treat: yes, its Mrs Sew and Sew herself! I can’t tell you how thrilled I am that Mrs Sew and Sew agreed to this interview, and would like to thank her (and the IWMs Sarah Gardiner, for kindly acting as her intermediary). 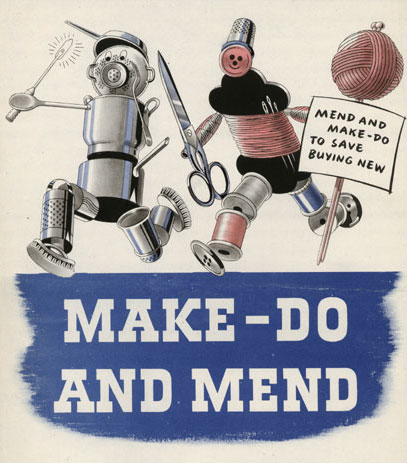 In what ways has your life changed since war began? Are any of these changes welcome?
The negative aspects of war are well known. Obviously having family abroad fighting on our behalf is incredibly difficult to cope with, while rationing and bombing has a huge effect on us back home. But in a positive light, the war has helped bring communities together to help one another. There are so many on my street that I didn’t know before the war that I know now. It’s a source of tremendous strength to know that you’re not suffering alone.

Do you think that managing on rations is easier in London than in the rest of mainland Britain?
I imagine it’s roughly the same. Rations are the same throughout the country, but of course in rural areas you have easier access to locally grown produce that might find its way to your plate without entering the ration system. And this is probably offset by the fact that produce from abroad often comes through London docks – and sometimes finds its way onto the black market.

I understand that the German magazine Frauen Warte is incorporating propaganda into its knitting patterns. What are your views on this?
Well, it’s not surprising really. They’re doing everything they can to win the war. I’m surprised we haven’t started doing it too!

Did you hear about the recent abuse of fuel rationing in Barrow in Furness? How can we discourage such things from happening?
I haven’t heard about the problems in Barrow in Furness, but I do think we need to keep reminding people why rationing is so important. We need to do everything we can to support the war effort, and these rations support this. 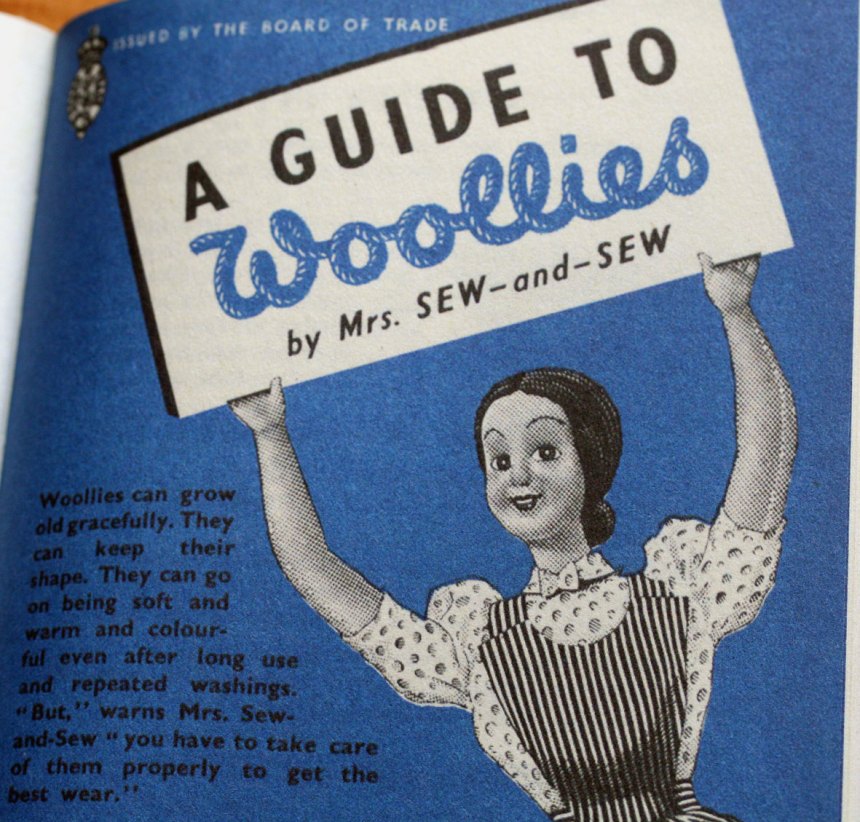 Will I manage to clothe myself and my family on the new reduced ration of clothing coupons? What are your top tips for coping on coupons?
It’s going to be difficult keeping everyone clothed on the rations. But there are lots of things you can do to make this easier. The most important thing to do is to really look after your current clothes to make them last as long as possible; repair holes as soon as they appear, shake out clothes before putting them on hangers, check stored clothes for moth eggs frequently and so on. And when clothes are really beyond repair, think about how they can be used in other ways…old sheets can be turned into handkerchiefs and thick material can be used to patch elbows and knees on children’s clothes.

Is knitting wool subject to rationing?
I’m afraid so. But have you got any old woollen items that you’re not wearing any more? It’s possible to unravel the wool from old clothes back into a ball – it’ll be thinner than it was before, but it should still be usable.

Should I just throw away my old, worn winter coat?
Oh, definitely not! Don’t forget that we’re all in the same position trying to make ends meet. Other people on the street are patching up their old clothes and it’s not embarrassing at all that you can do the same. 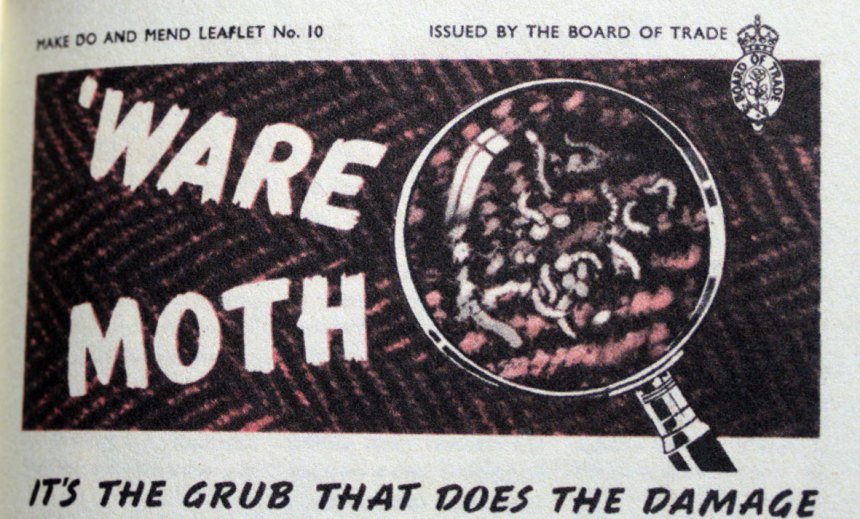 Help! I’ve found moths in my knitting basket. What can I do?
Oh no! Well the one thing moths hate is fresh air. Take the whole basket outside, empty it out and give everything a good shake. You might need to unravel the wool to get rid of all the moth eggs. They’re a real pest, and you should definitely give stored clothes a good shake outside too to get rid of the eggs (they’re often found under the collar).

Which women from the past do you most admire?
Oh, Marie Curie is top of the list without a doubt. An incredibly intelligent woman, and it’s so rare for a woman to succeed in such a male dominated profession. Did you know she was the first female professor at the University of Paris?
I also admire Madge Watt. She was the driving force behind getting the Women’s Institute in the UK, and this organisation has helped look after evacuees during WWII.

And who inspires you today?
It’s so difficult to just list one person. There are so many women pulling together to get us through the war, many of whom are only known on their street, that it would be unfair to name someone who’s famous. My answer is therefore that unsung heroes throughout the country are the source of my inspiration today.

Please tell us the name of your favourite film.
I love Gone With The Wind! It’s such a wonderful, stirring story. And Clark Gable is a real dish! 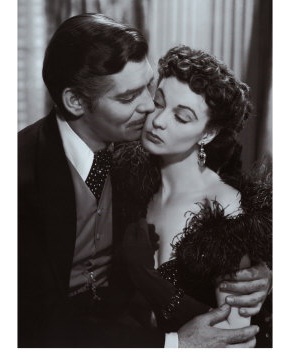 Thankyou, so much, Mrs Sew and Sew!

Links and further reading:
Imperial War Museum
Mass Observation Archive
Helen Reynolds, ’Your Clothes are Materials of War: The British Government Promotion of Home Sewing during the Second World War’, in The Culture of Sewing; Gender, Consumption and Home Dressmaking (Berg, Oxford, 1999), pp. 327-339.
C. Buckley, ‘On the margins: theorizing the history and significance of making and designing clothes at home’, Journal of Design History, volume 11, no 2 (1998), pp. 157-172