I rather enjoyed being a tourist in Ireland. Here are some of the touristy highlights . . . and a few lowlights of our trip.

Without a doubt, the culinary highlight was the wild smoked salmon at the Connemara smokehouse. The lowlight was Irish beer, or rather, the singular lack thereof. As I no longer drink (booze bad for an injured brain), this was more of a concern for Tom than me, but I shared the disappointment when we spent half a day driving to a microbrewery we had heard tell of . . .which had actually closed down.

I confess that we ended up here because it was a very rainy day, and the entrance price included a cup of tea (a genius touch), but the place was an unexpected delight. It is hard to explain exactly why the Doagh Famine Village is so good without spoiling its many surprises . . . but I do recommend a visit if you are ever on the Inishowen Peninsula (which is, by the way, a lovely spot). I would describe Doagh as an ‘attraction’ whose ostensible purpose is to celebrate the culture and resourcefulness of the people of Northern Donegal. It succeeds in this aim admirably, but what makes it all the more interesting is the way that the ‘village’ has expanded beyond its original remit (and boundaries) in an enthusiastic attempt to represent All Irish History and Culture at All Times . . Ever. This, of course, is a totally impossible task, but it is a laudable one, and the way history is presented is actually refreshingly original when compared to many official (ie, publicly funded) ‘heritage’ attractions. I think what I really liked about Doagh was that it had a Point of View and it wasn’t afraid to make it. Where else could you find a display about absentee eighteenth-century English landlords tellingly juxtaposed with a critique of the apricot-coloured holiday mansions that one sees everywhere in Donegal? At times, these idiosyncrasies do tip over into the faintly absurd – nowhere more so than in what I can only describe as The Peace Process House of Fun. Here, the unsuspecting visitor suppresses their claustrophobia and navigates their way around a republican safe house, locating several ‘hidden’ rooms, until they find Ian Paisley and Jerry Adams sitting down together. I couldn’t quite believe it was real . . . but it really was. Curiously, Tom and I seemed to be the only ones who found the discovery of former prime-ministers behind fireplaces and wardrobes hysteria-inducing . . . 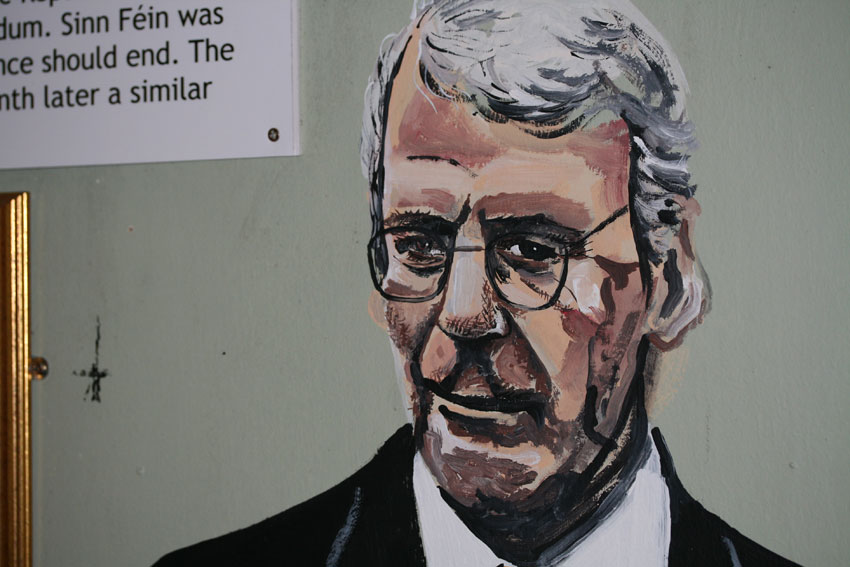 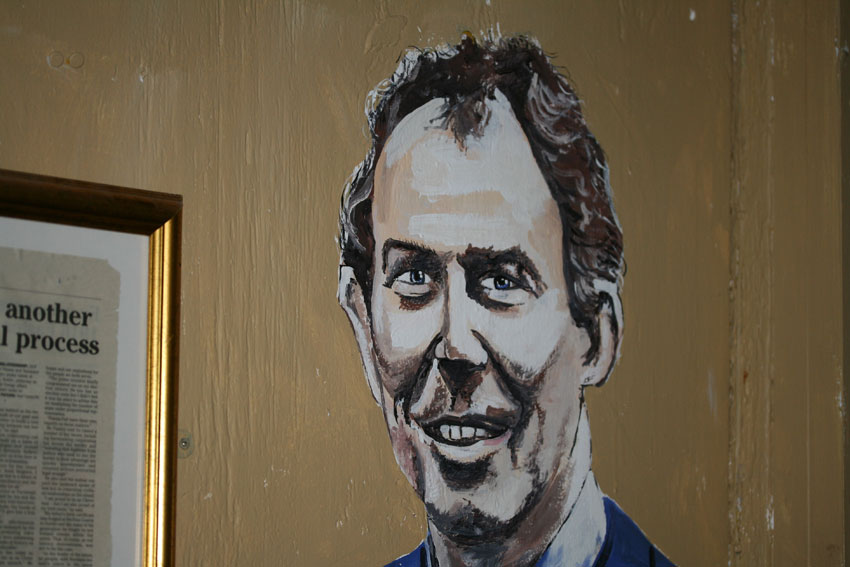 . . .but there you go. The tea, when it came, was a proper cup of tea and it was served with jam and bread. Brilliant! I heartily recommend Doagh. It has to be seen to be believed.

Worst tourist experience
This is a tie between two places. The first is the Glenveagh National Park. We popped in at the park’s well-appointed visitor centre to find an OS map of the area so that we could go for a walk. Now, you might think that a place whose business it is to promote the outdoors would be the perfect place to find a map. You would be wrong. The gift shop had novelty sheep and leprechauns a-plenty – but no OS maps. In fact, there were no maps of the area there at all. Confused, we asked at the ‘information desk’ for ‘information’ – could we buy a map – any map of the area? We could not. There were no maps to be had. We were then told that, if we wanted maps, we should go and look on the internet. The internet! I really wanted to say: “Look, we are standing right here in front of you, in your visitor centre, dressed in our walking gear, asking for a map, so that we can just go for a walk in your national park. ” But we are British, so we politely replied “Oh, right, we see. Thankyou.” and left the building. It seems, at Glenveagh, that the great Irish outdoors is only to be enjoyed if you pay several euro to be shipped out to it on a bus, and access it as part of a pre-packaged ‘nature experience’.

I would still recommend visiting Glenveagh, as the landscape is spectacular, and clearly very well-managed. But one place I would not recommend in any capacity is the Leenane Sheep and Wool centre. If you are a child, or the parent of one, and know nothing at all about sheep or fibre, then you might spend a fun couple of hours here. If you are a knitter, spinner, weaver – or anyone with any sort of interest in textiles – then I really wouldn’t bother. The best thing I can say about this place is that I learned a few things I did not know about the development and extinction of some breeds of Irish sheep. But I had come hoping to find out a little more about the weaving industry in this part of Ireland, and I was sorely disappointed. I learnt very little about Leenane tweed, and nothing at all about what distinguished it as a cloth. In one room, ‘Irish’ dyeing was illustrated with some skeins of Scottish yarn, and the whole experience was accompanied by not one but two competing soundtracks of ‘Irish’ music that made it impossible to concentrate. And then there was the usual, predictable gubbins about “each knitted stitch” of an Aran sweater “having its own meaning.” Here I lost patience. It costs 5 euro to be peddled this rubbish. I would not waste your money.

Best Yarn: Studio Donegal
As in some parts of Scotland, Ireland abounds with woollen ‘mills’ that are not, and purveyors of ‘traditional crafts’ which turn out to be sweaters mass-produced in the far east. Down with this sort of thing! At Studio Donegal, one breathes a happy sigh of relief. There is a strong sense of the area’s textile history in Kilcar, but Studio Donegal is very clearly a working business, not a heritage centre. There is a workroom with some fabulous old looms where you can see Donegal Tweed being woven – and, here you are watching working weavers, not a ‘demonstration’ or ‘performance’ of weaving. Downstairs is a shop filled with lovely woolly stuff made by the folk upstairs.

There are beautiful wraps and throws and blankets. I was particularly drawn to the two-colour graphic designs, which strongly reminded me of Latvian weaving styles. 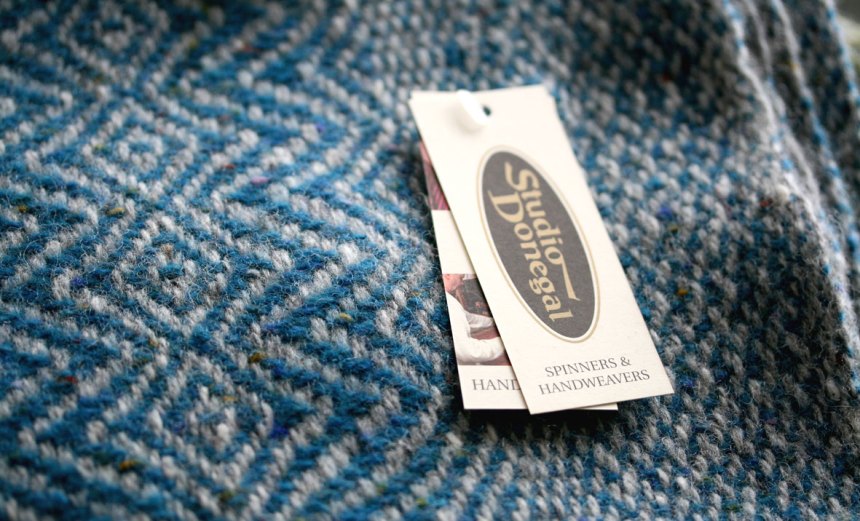 All very nice, I hear you say, but is there yarn?

Indeed there is – spun for Studio Donegal just round the corner at Donegal Yarns – and lovely stuff it is too. In fact, if the Veedon Fleece is to be found anywhere in Ireland, I think it might be in Kilcar. While I was enjoying myself at Studio Donegal, Tom and Bruce went for a walk around the village. They were joined by a nonchalant lamb, who walked out of someone’s front door, insisted on making friends with Bruce, having its head rubbed by Tom, and pootling happily along with them. I did not see FRIENDLAMB – and indeed did not hear about it until we were back on the road (badTomandBruce)- but it has already become the stuff of myth.

Camping in the wazzwaggon was lots of fun – to say that Bruce loves it is a total understatement – and we surprised ourselves by going ‘wild’ the whole way. We stayed in some truly wonderful places, and only had to share a spot with other campers on one occasion. We are keeping our favourite favourite to ourselves, but Malin Head definitely comes a close second.