Throughout WOVEMBER, we’ll be exploring WOOL from several different angles, and today Felix and I are both writing about how wool wears. We knitters are perhaps sometimes more interested in the new and the spectacular than we are in the old and the reliably-wearable, but durability and longevity are important factors to consider when choosing yarn for a project that will actually be worn. Kristen wrote two excellent posts about this very issue here and here, and because Felix and I have both knitted Decos out of two very different breed-specific British pure-wool yarns, we thought we’d jointly write posts about how these garments have worn.

I have knitted many things that have not worn well – and the worst was probably the first sweater I made for myself after my return to knitting – a Kim Hargreaves cardigan out of Big Wool. This yarn is a bulky merino, and knits up very fast – I made my sweater in under a week. I was very pleased with myself and my cardigan, but within days it had begun to pill, in a few weeks time it had turned into a tatty mess, and after a month or two it was completely unwearable. I never knit with Big Wool again. I would show you this garment, but I was so displeased with it that, after removing its carefully-chosen buttons, I got rid of it. I don’t know if Big Wool has changed, but at that time it was so loosely spun it almost seemed like a single-ply. My cardigan was also knit at a fairly loose gauge on, as I recall, 10 and 12mm needles. No wonder that the damn thing pilled!

While my big-wool cardigan didn’t see a year, at the other end of the wearability spectrum, I own a hand-knitted garment that is more than 40 years old – a cabled cardigan that my grandma originally knitted for my mum, and was later appropriated by me. I still wear this cardigan, and it still looks fantastic. My grandma knitted it from the sort of old-fashioned, worsted-spun aran that is quite hard to find today. I love this garment for many, many reasons and promise to show it to you another time. 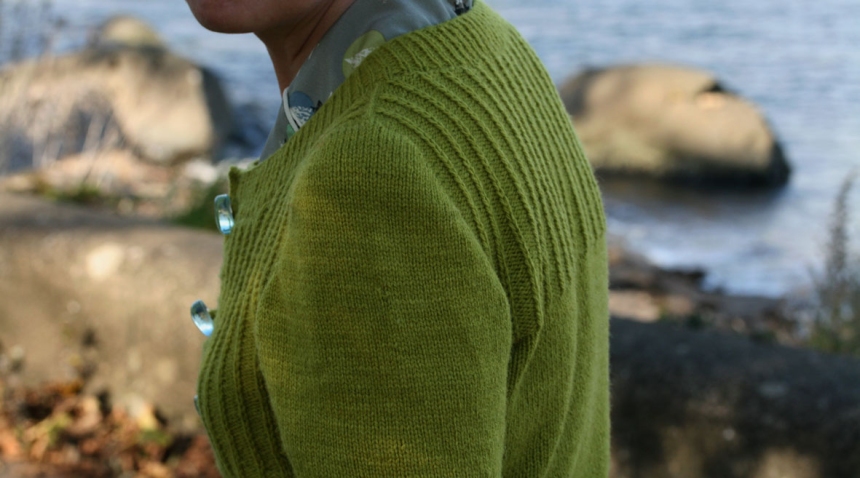 It was the yarn that first excited me when I was designing Deco. Several of my knitting comrades were fashioning glorious items out of Blacker Corriedale, and when I saw the ‘olive’ colourway I immediately knew it was a yarn I had to knit with. I swatched a simple slip stitch pattern, and it looked so fantastic that the yarn really did tell me what it wanted to be. Before I knew it I had a sketch and design, and was knitting up a cardigan.

Quite apart from the fact that I designed it, I just love this cardigan – over the year since it was knitted it is has seen a lot of wear. I like to be outdoors, and Deco has often been outdoors with me. 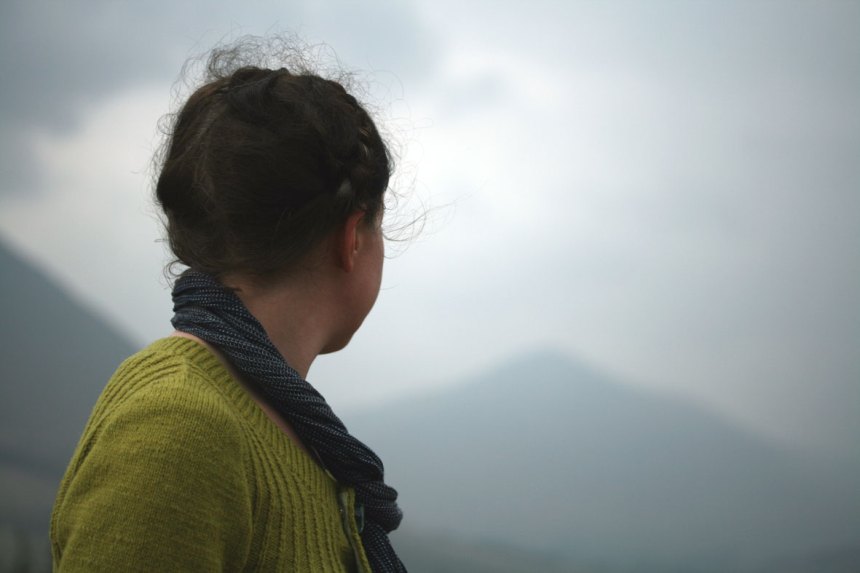 Deco has been with Bruce on many rambles, and it has been frequently jumped on and pawed at by my damp and mucky companion, and his equally mucky dog-pals.

(This Spring, somewhere above the Bridge of Orchy)

But, with a frock underneath it, Deco remains a smart garment too: I took it with me to Dublin in September and, as I had only took one outfit with me due to Ryan Air’s luggage restrictions, I wore it solidly the whole time I was there.

So how has Deco held up a year after it was knitted? Really amazingly well. Here is the back

And here is under the left elbow, a place where you might expect to see significant wear.

I know that I have brushed dried mud from this cuff – and do I spot a dog hair?

I bound the bases of the wonderful Nichols buttons to reinforce them – they are still luminous, still beautiful, and most importantly, still stable.

The tape on the opposite button band is still doing its job very well, and despite being snapped and resnapped many times, my snap fasteners have not come loose.

The shoulders and sleeve caps remain neat and hold their shape . . .

and in fact, the only area of wear that I could find was a small place on the underside of the right arm 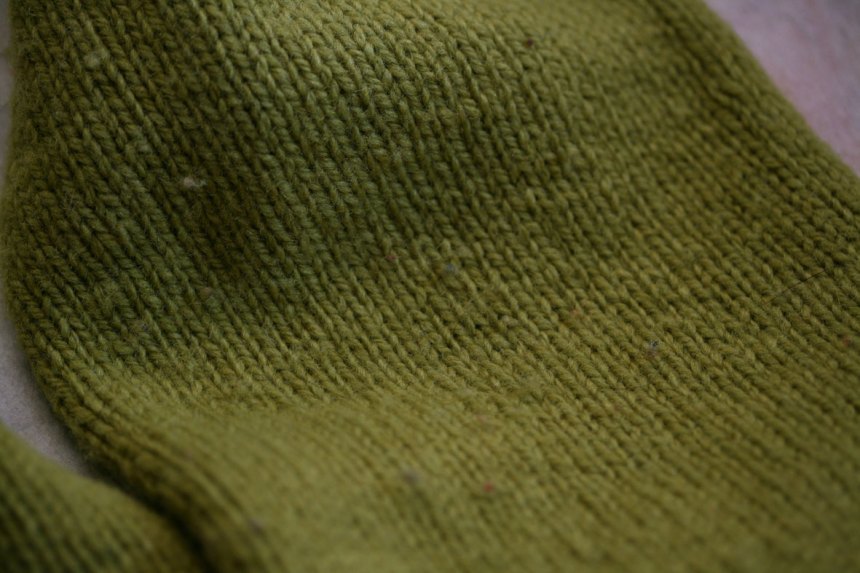 There are a few little pills there, but if you look closely, you’ll see that, (amidst the dog hair – and do I spy a crumb?) some are clearly rogue pills from a rust-coloured item that Deco has been sitting next to in my wardrobe.

Why has this cardigan worn so well? A little of it is attributable to the design (ahem) which, though being seamless, has several features that make for a very stable garment: short row sleeve caps; three-needle-bind-off at the shoulder-tops; close-gauge fabric; and front bands that are reinforced with tape, and use snap fasteners in place of buttonholes. But mostly, this garment has worn well because of the nature of the WOOL I used to make it.

Call me contrary, but I have yet to be totally blown away by a 100% merino yarn. Merino crosses, on the other hand, frequently amaze me. You may recall the rhapsodic nature of my posts about Bowmont Braf – a Shetland-merino cross – and I feel similarly rhapsodic about Corriedale – a dual-purpse breed originally developed in New Zealand as a Merino-Lincoln cross. What’s so special about this yarn? To quote Deb Robson:

“medium-soft, it has nice long staples, some luster, and a well-defined, even crimp, which means it has a lot of loft and elasticity. It’s a resilient fiber with enough character to be interesting.”*

Clara Parkes, meanwhile writes of Corriedale’s “inviting hand that falls somewhere between finewool and longwool, rather like the breed itself. Corriedale makes a smooth and extremely durable worsted yarn but it can also be spun into a loftier, more elastic woollen yarn.”**

I’m in total agreement with everything Deb and Clara say about Corriedale with, perhaps, the minor exception of the lustre since the defining characteristic of the Blacker Corriedale at least is an almost severe matt-ness. There is no sheen to the yarn at all and when dyed, this lends it a pleasing and extremely saturated quality, apparent in Lilith’s gorgeous new hand-dyed Corriedale. There is something velvety about the way the yarn and colour absorb the light. The Blacker Corriedale I used is woollen spun, and when knitting, it feels light and soft and fluffy in the hand. While working it, I expected it to bloom a bit like a woollen-spun Shetland, but it didn’t bloom so much as stabilise. The yarn that felt fluffy in the hand turned into a pleasingly firm medium-soft fabric that also retains the flexibility that befits a knitted garment. You can see that it has good stitch definition, but what you can’t see is that it is really warm, and a little water repellent – great for a cardigan, or other outer-garment. And having experienced this several times, I can also testify that dried mud simply brushes off its surface without affecting the quality of the knitted fabric at all. 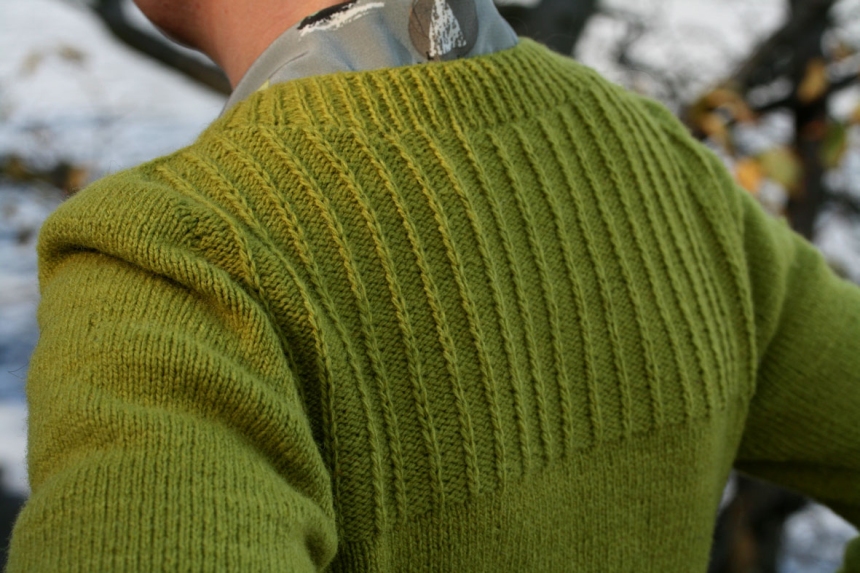 In sum, I heart Blacker Corriedale and can affirm that you will not only really enjoy knitting with this yarn, but can make a garment which will wear extremely well. I’m certainly looking forward to many more years in my Deco.

If these two books are not the cornerstones of your knitterly bookshelf, I suggest you rectify the situation immediately.