I so enjoyed your translations and comments on this post, that I thought I’d continue the First World War theme with some of my favourite items in my postcard collection. Known to collectors generically as “silks”, these machine-embroidered cards first appeared around 1900, and were produced in vast quantities during the twentieth century’s first two decades. As an attractive and eminently portable form of sentimental greeting, these cards proved particular popular among British troops serving in France. Some estimates suggest that, in their wartime heyday, more than ten million were produced. 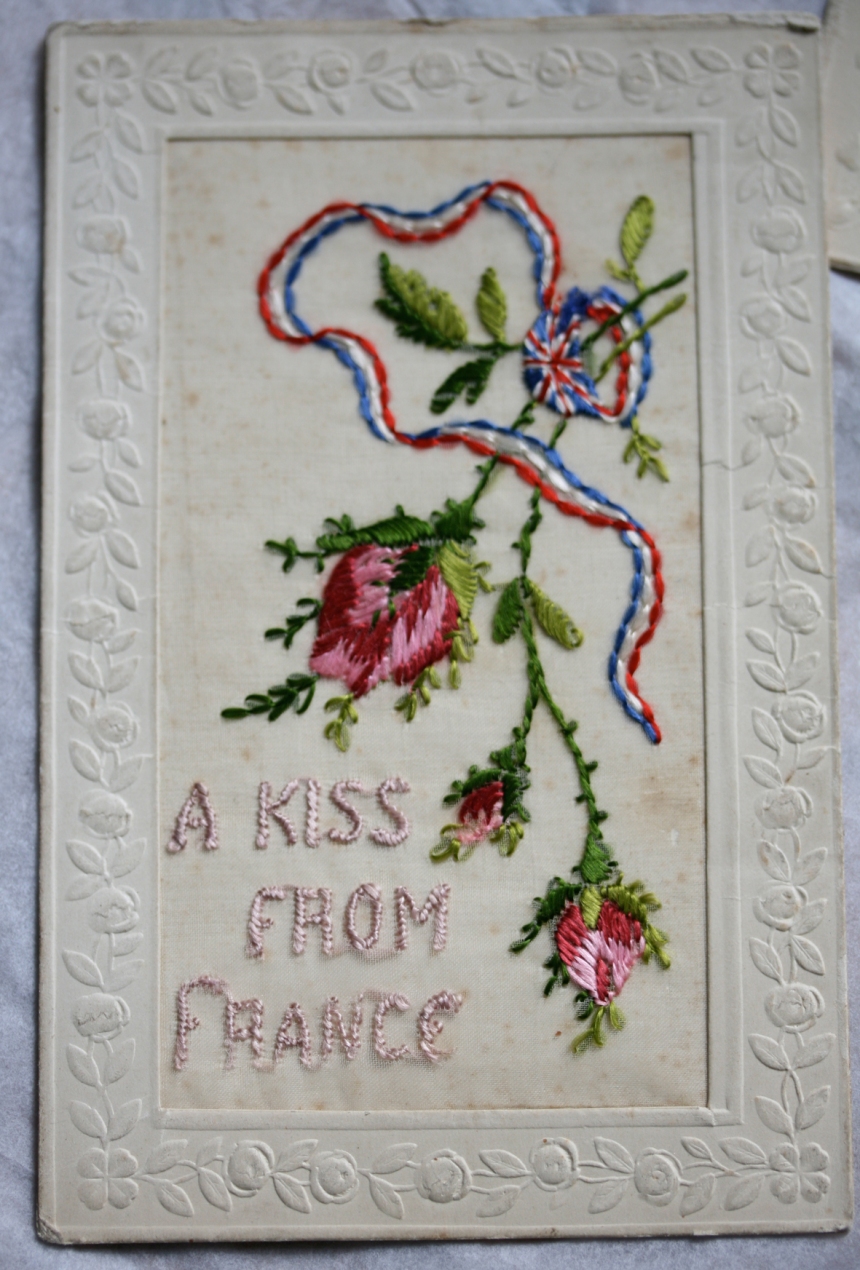 Sources used to suggest that these cards were hand-embroidered, but this isn’t the case. Though particularly elaborate panel designs might involve finishing by hand, I have never seen one that didn’t feature machine embroidery. Using innovative Heilmann or Schiffli embroidery machines, a design could be repeated up to 400 times across large panels of organdy before being cut out, and individually assembled into framed and embossed cards. There were several factories in France and Switzerland where cards might be manufactured from start to finish, but some machine-embroiders also produced piece work from home, sending completed panels to be finished and assembled elsewhere.

The cards were usually sent in military mail pouches rather than being stamped and posted in the ‘open’ mail. Because they were protected in transit, the embroidered panels could be quite delicate in design. Many of the cards use the structure of the embroidery to create a tiny envelope:

Into which another card, with a personal greeting might be inserted.

This is one of my personal favourites: the card would have been placed inside an envelope; the card is, itself, an envelope; and the embroidered panel also depicts an envelope-carrying bluebird.

While many of the designs are conventional (though nonetheless appealing) others feel perhaps more modern and innovative. 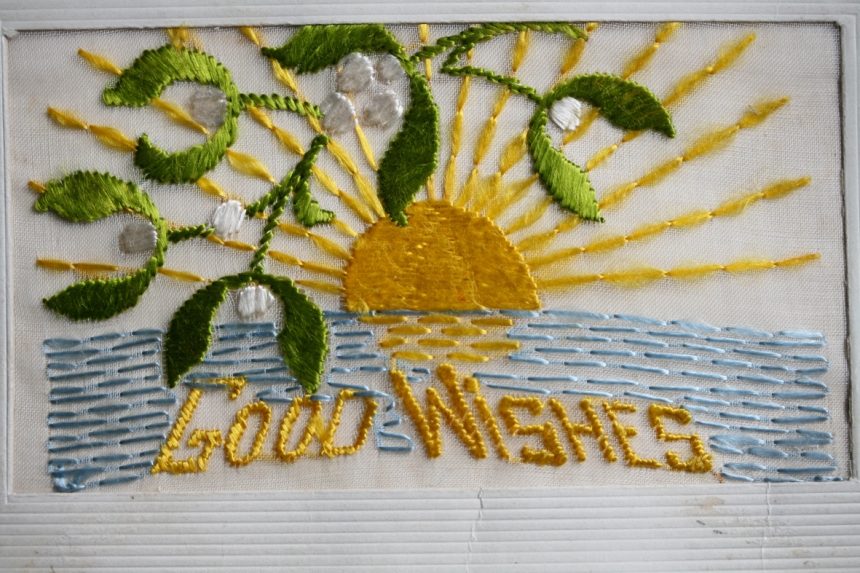 and while theres a tremendous variety of embroidered designs, the same might be said of the paper-embossing, which on some cards is more elaborate than the stitching.

And there’s a particular kind of confluence between these stories and the stitches through which they are conveyed.

Here is one of my favourites: it is a scene unmistakably French with trees and tiny church; ploughed field and red earth . . .

. . . framing a message of poignant reassurance. 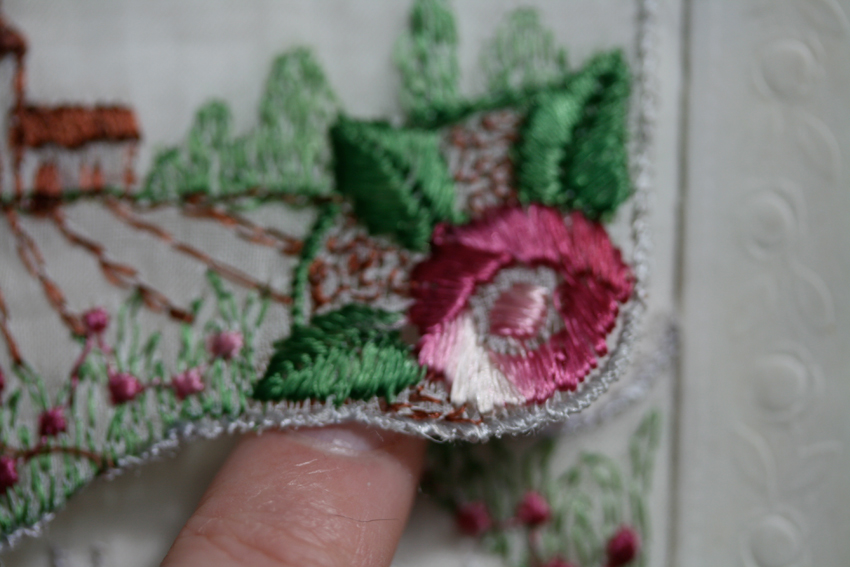 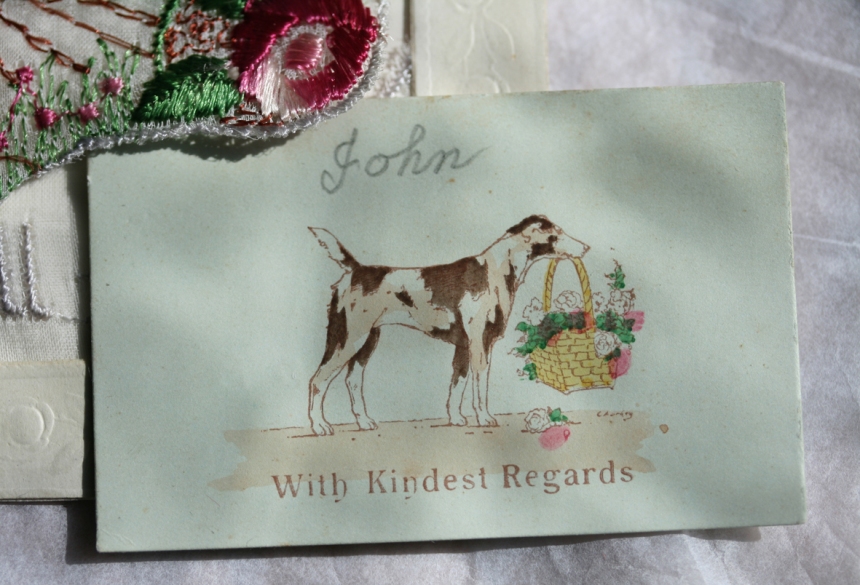 It is a simple, mass-produced, material object.

It is also a massive conveyer of meaning.

82 replies to a kiss from France