Here is the third garment in my Edinburgh series – the Port o’ Leith gansey.

This garment has twisted stitches and cables, that are reminiscent of maritime nets and rigging. It also features a deep, cowl-like collar, which is great for warding off North sea winds.

. . . but which is also detachable, for when the weather is warmer, or you wish to hail a passing vessel.

When designing this ensemble I wanted to retain a simple shape, as best befits a cabled gansey. But I also think that traditional gansey-gussets can be somewhat unflattering on a women’s garment, creating far far too much fabric around the underarm and upper torso.

So I’ve shaped the upper torso for a neater fit, following and adapting Elizabeth Zimmerman’s directions for a seamless saddle-shouldered sweater.

. . . and are echoed in the twisted stitches that feature on the collar and front panel.

Creating a Wintery ensemble that has some fitted structure, but is also really cosy and easy to wear.

I am modelling it here with 4 ins positive ease, wearing a vest and woolly baselayer underneath. . .

. . . but the gansey could also be worn with zero or negative ease, and you’ll find instructions in the pattern for selecting the best size, and modifying the garment for a more tailored look.

In the essay that accompanies the design, I write about Leith’s connections with the wool trade, and with Shetland knitting, and it is fitting that the garment is knitted in a great Shetland yarn – Jamieson and Smith Shetland chunky. Having done a lot of knitting with this yarn, I’d say that it is really more of an aran-weight than a chunky, creating a fabric that seems to have just the right amount of density at a gauge of 16 sts to 4 ins (on 5mm needles). I knit this sample in the natural ‘kirn mylk’ shade but the charcoal shade of this yarn is also particularly lovely, and I’ll hopefully show you another sample knitted up in this shade very shortly.

This yarn is worsted spun, which means that, while it retains a lovely Shetland wooliness it is also very smooth, lending it a stitch definition that’s ideal for twisted stitches and cables.

These photographs were taken down by Leith’s docks and shore at the Victoria Swing Bridge – which, when it was first constructed in 1874, was the largest swing bridge in Britain.

We used to live a short walk from here. Though you’ll now find delicatesans and confectioners and michelin-starred restaurants next to the Port’s traditional maritime haunts, Leith somehow retains its character as the least pretentious of Edinburgh places.

The pattern is now available digitally, via Ravelry, or in print from my MagCloud store
(I’m currently investigating ways of including a code with the print copy to enable you to store a PDF in your Rav library. This requires updating and altering all my print files – please bear with me – I’ll let you know when this is sorted and I can also issue those who’ve bought print copies of other patterns with download codes retrospectively, if necessary). 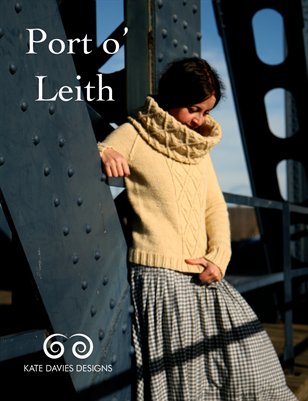