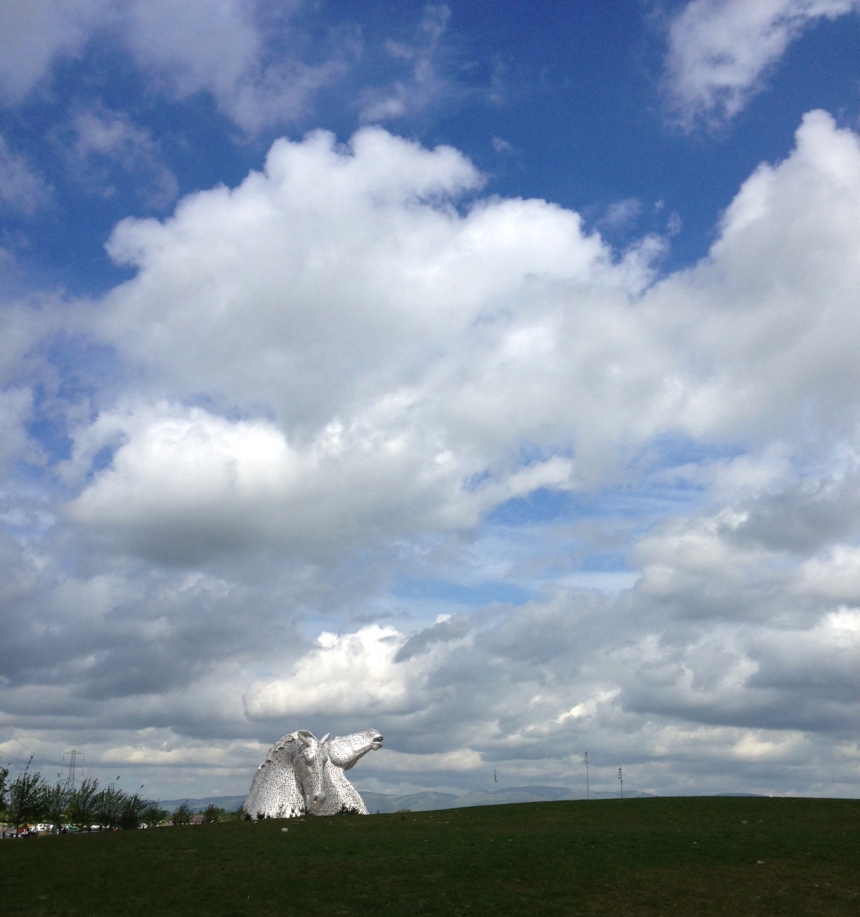 My parents have been visiting, and I thought they might like to see The Kelpies. A few years ago we rather enjoyed visiting Jaume Plensa’s Dream, a meditative and beautiful public sculpture commemorating Lancashire’s mining past. Like Plensa’s Dream, The Kelpies celebrate industrial heritage, but are things of water rather than of light. Kelpies are mythical Scottish water beasts, generally malevolent in nature, and able to assume many different forms. The Loch Ness “monster” should perhaps be more accurately described as a kelpie, and in Scottish song, art and literature, kelpies most often take the shape of a horse. 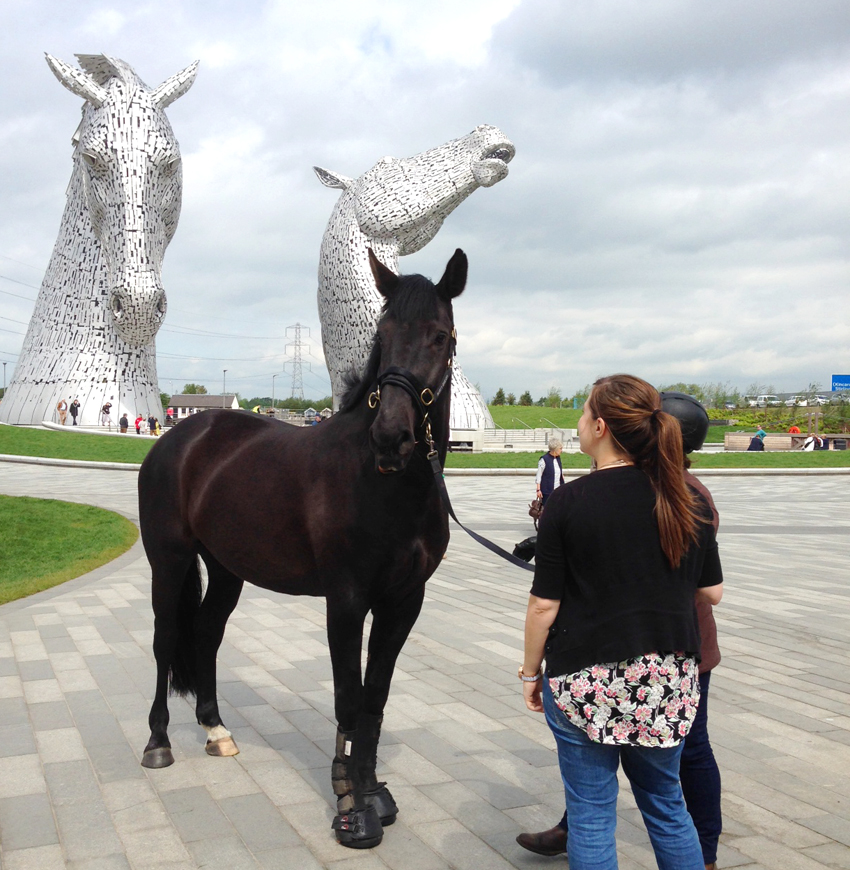 Taking the fabled creature as a starting point, Glasgow sculptor, Andy Scott has constructed a new mythology for the kelpie — one with a refreshingly specific sense of place, and history. Directly inspired by two local Clydesdale horses – Duke and Baron – Scott’s Kelpies celebrate the beasts who once pulled ploughs, carts and barges — effectively powering the industrial revolution in central Scotland through the Eighteenth and Nineteenth centuries. 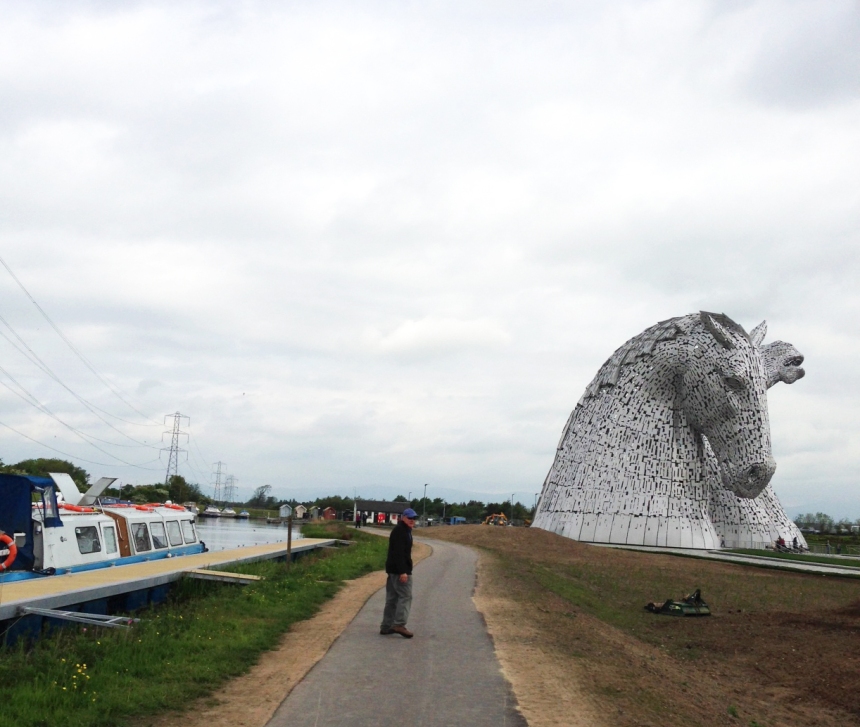 Scott’s Kelpies have been constructed at the basin of the Forth and Clyde canal, near Falkirk. Long before the development of railways and motorways, this important waterway enabled the transportation of finished goods and raw materials between Scotland’s industrial heartland and its ports. First constructed in 1790, it fell into decline in the middle of the last century. But its recent re-opening now enables continuous passage by water between Scotland’s East and West coasts. 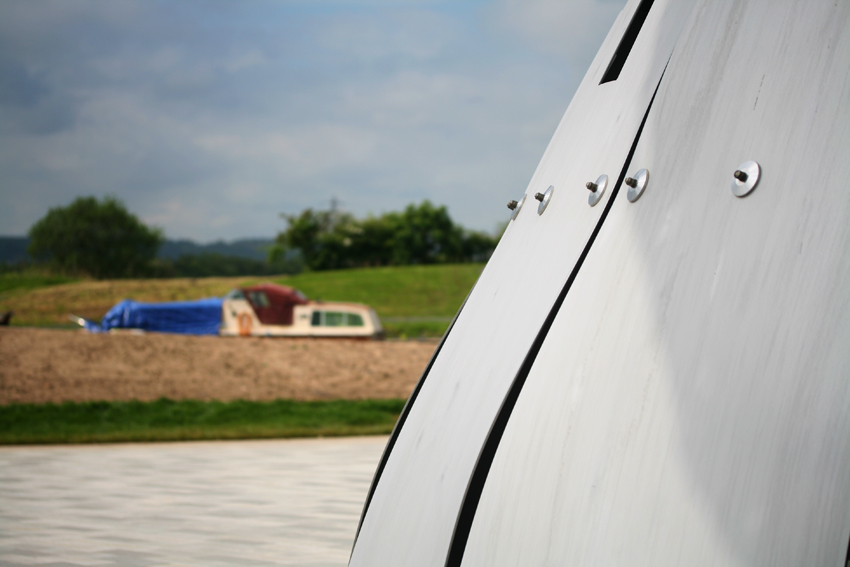 Scott’s Kelpies are constructed from an industrial material – steel – but when the light hits them they also seem to be made of water: rising and straining, sodden and dripping, from the basin of the canal. 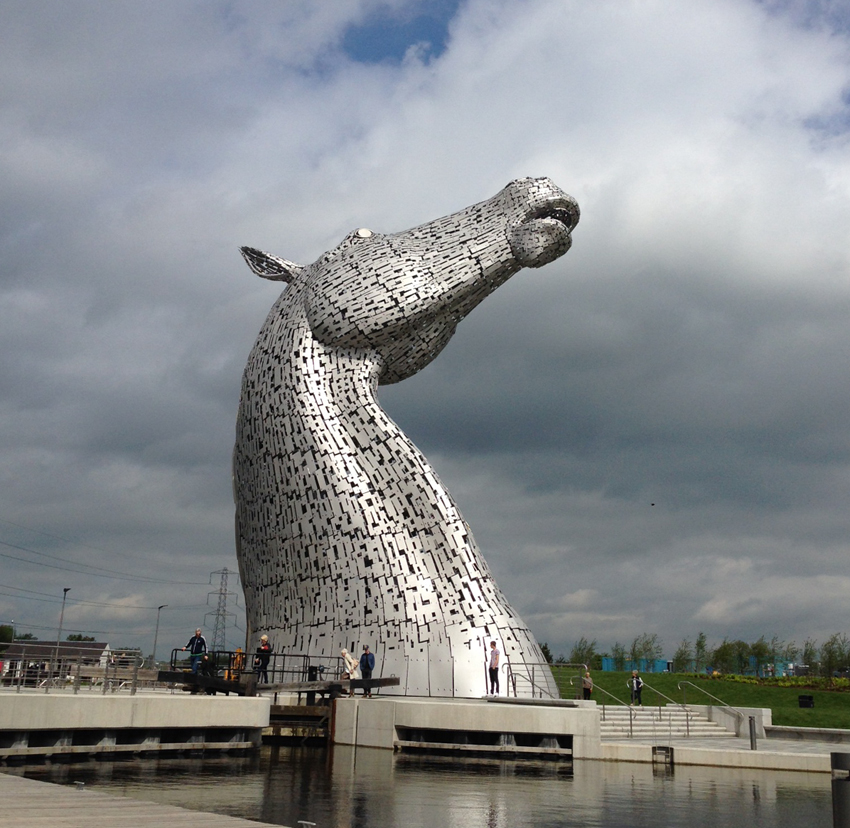 While celebrating the energy and might of Scottish industry, the Kelpies represent, in themselves, a remarkable feat of industrial engineering. Each of the 990 plates that make up the two Kelpies steel “skin” is distinct and different – our guide described them as “snowflakes.” This short time-lapse film documents the process of their construction, and, when you visit, you can examine their incredible structure from the inside. 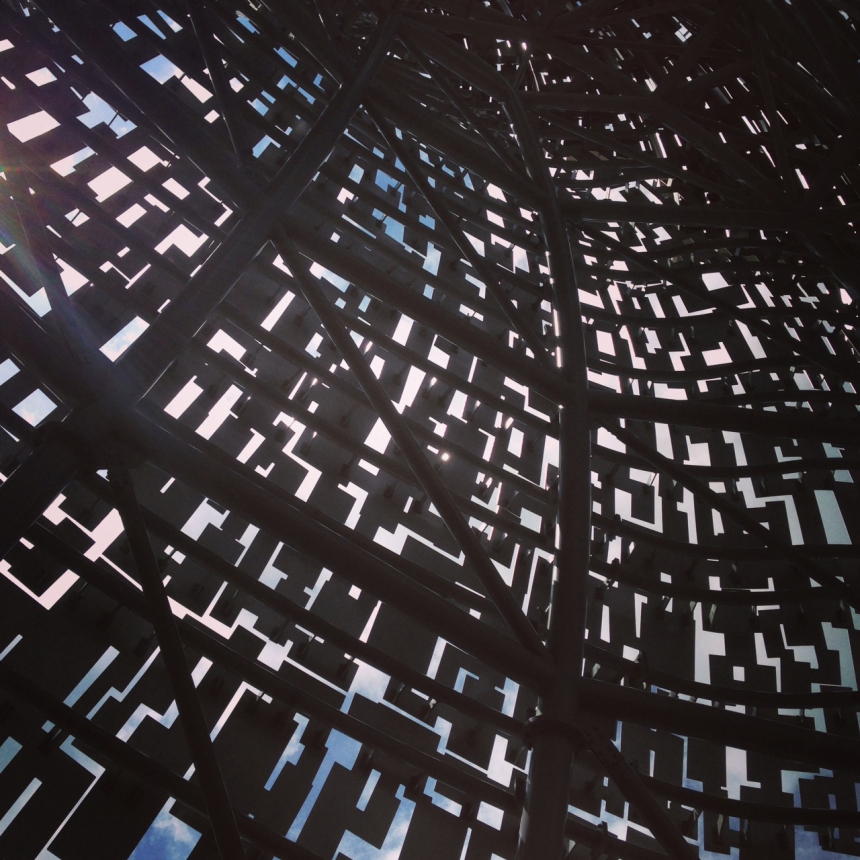 The Kelpies stand over 30 metres high, and are certainly majestic. Yet to me, it is not their size, but Scott’s very precise sense of detail and characterisation that impresses most: the flared nostrils, the flickering ears, the individual muscularity and movement. Detail at this scale somehow lends these monumental objects an immediacy that is deeply emotive. 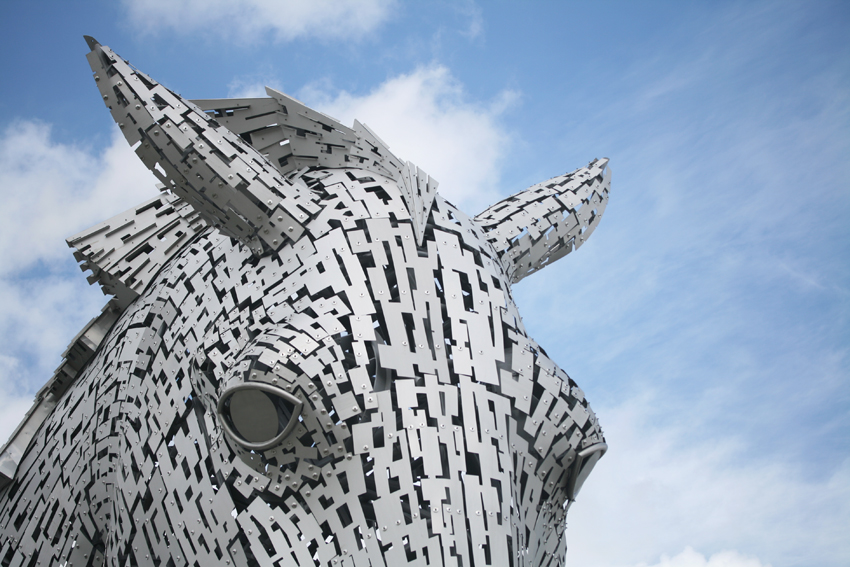 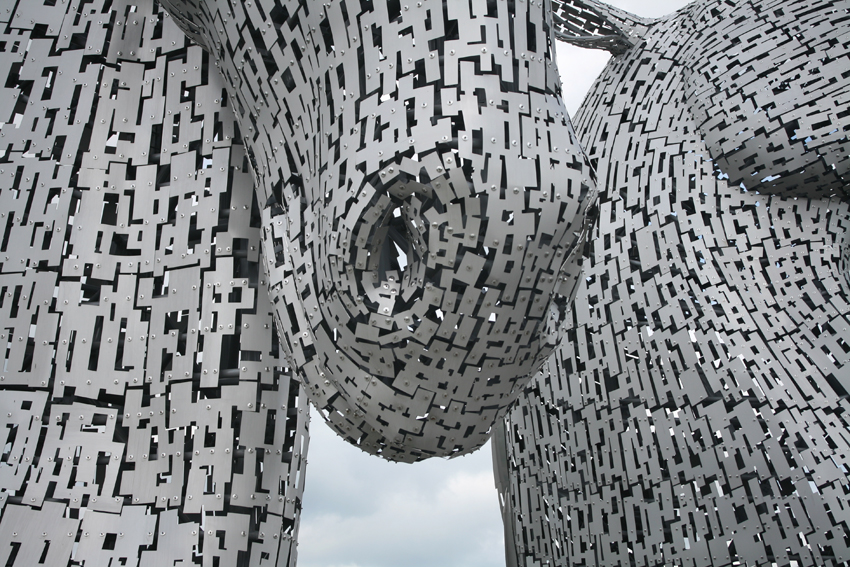 Andy Scott says: “I see The Kelpies as a personification of local and national equine history, of the lost industries of Scotland. I also envisage them as a symbol of modern Scotland – proud and majestic, of the people and the land.” Probably the best thing about the Kelpies, it seems to me, is that they are the focal point of what seems to be a modern and genuinely public space: a landscape that, with its new network of trails, cycle paths and waterways, once again has a practical function for the folk of Falkirk and beyond. 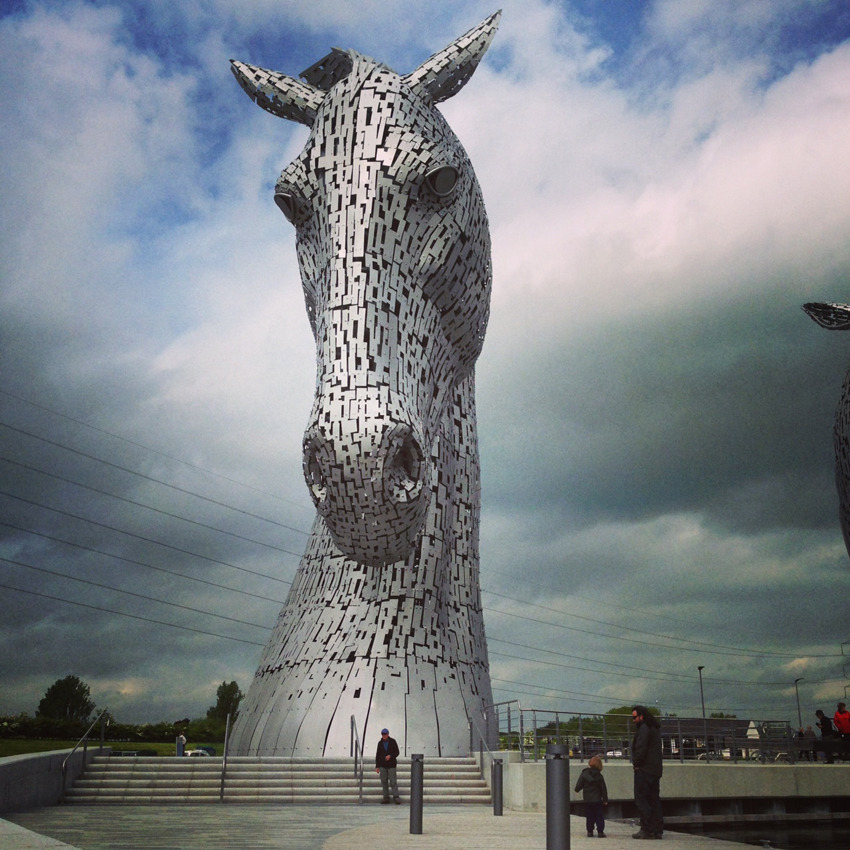 My Mum and Dad and I all enjoyed our visit, and would highly recommend the very reasonably priced tour, as well as our knowledgable and enthusiastic guide, David.

46 replies to The Kelpies