A few weeks ago, I mentioned that I was designing something inspired by my collection of John Clappison Hornsea pottery designs. This is the final pattern that I’ve prepared to launch at Edinburgh Yarn Fest. 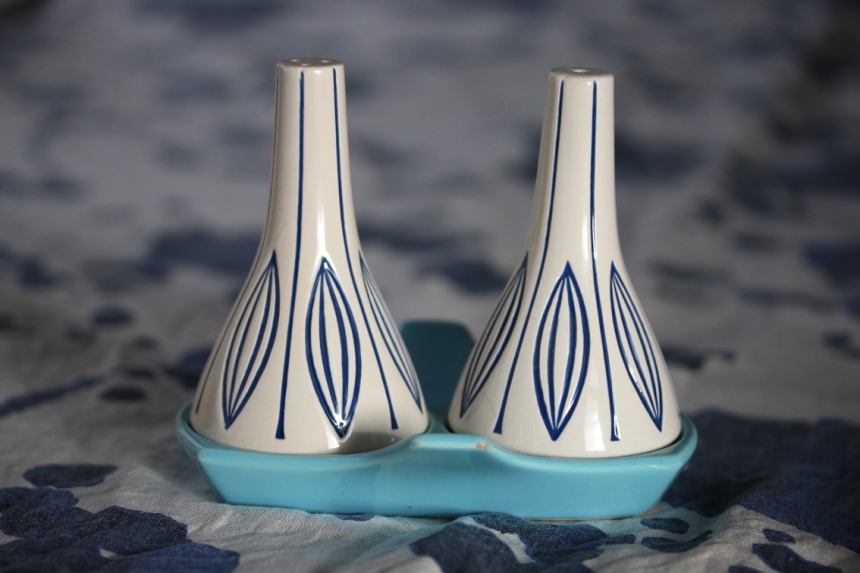 This is my favourite Hornsea piece. It is a cruet called “blue onion.” Clappison created it in 1963, and like much of his work of that period, it features a surface design whose clean lines really work with the shape of the object beneath. I love its simple curves. It is strongly suggestive of an onion, without being or imitating an onion. I am very fond of it.

If Clappison’s design suggested an onion, I thought I could create something that suggested Clappison’s design. An onion twice removed. When I looked again at the cruet, what I found most pleasing about it was just how fluid its lines were. Fluidity is sometimes hard to achieve in the surface design of stranded knitting, and I wondered if there was a way to maintain that sleek fluidity by combining colourwork with cables. I saw corrugated rib when I looked at the cruet, and I felt there might be a way of using travelling stitches to make those simple ribbed lines move about in fluid fashion.

After a considerable time charting and recharting, swatching and reswatching, knitting and reknitting (for which enormous thanks are due to Mel, who together with me tirelessly tweaked countless iterations of the design) this is what we came up with: 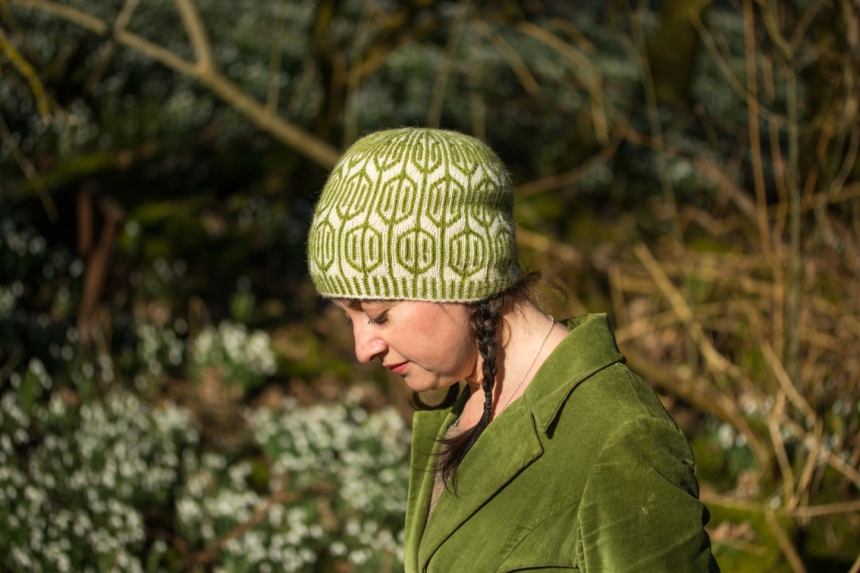 The hat starts with corrugated rib, out of which the pattern seamlessly develops . . . 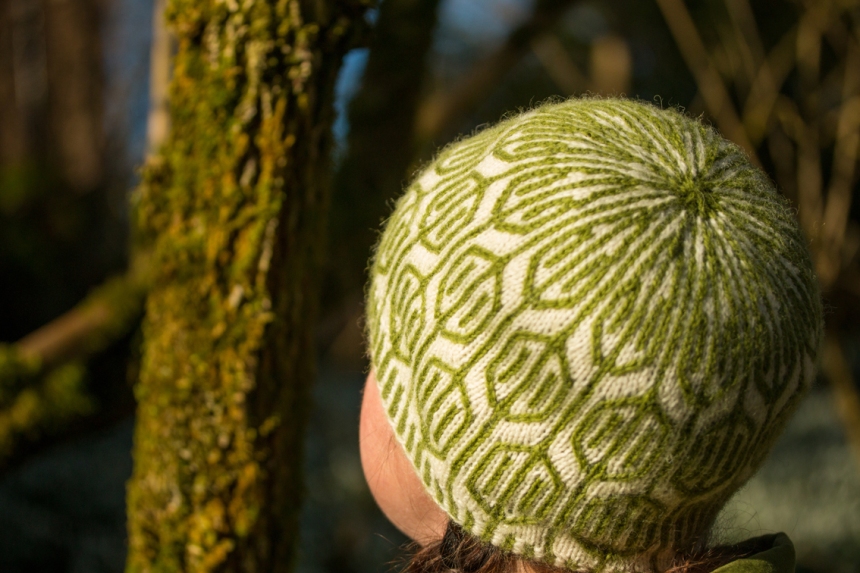 . . . the pattern is created out of the rib by moving it around with travelling stitches 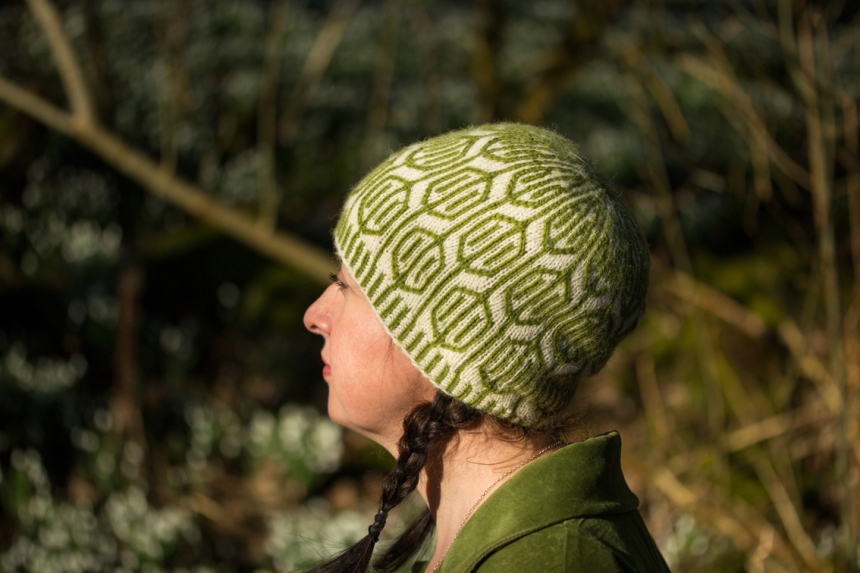 And as it draws in toward the crown, the corrugated pattern simply re-emerges, swallowing up the extra stitches . . . 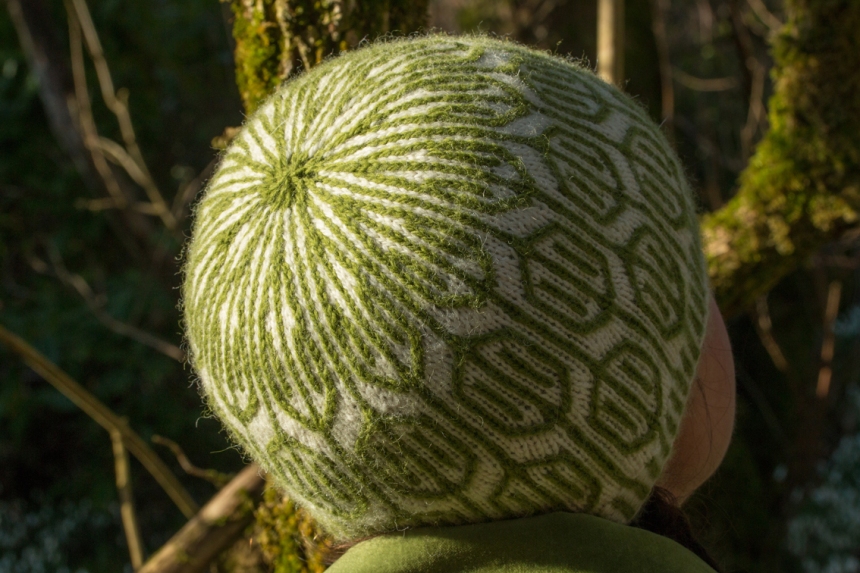 What a fun technique! The end result is a dramatic and graphic design, which is lots of fun to make and with which I’m really very pleased. 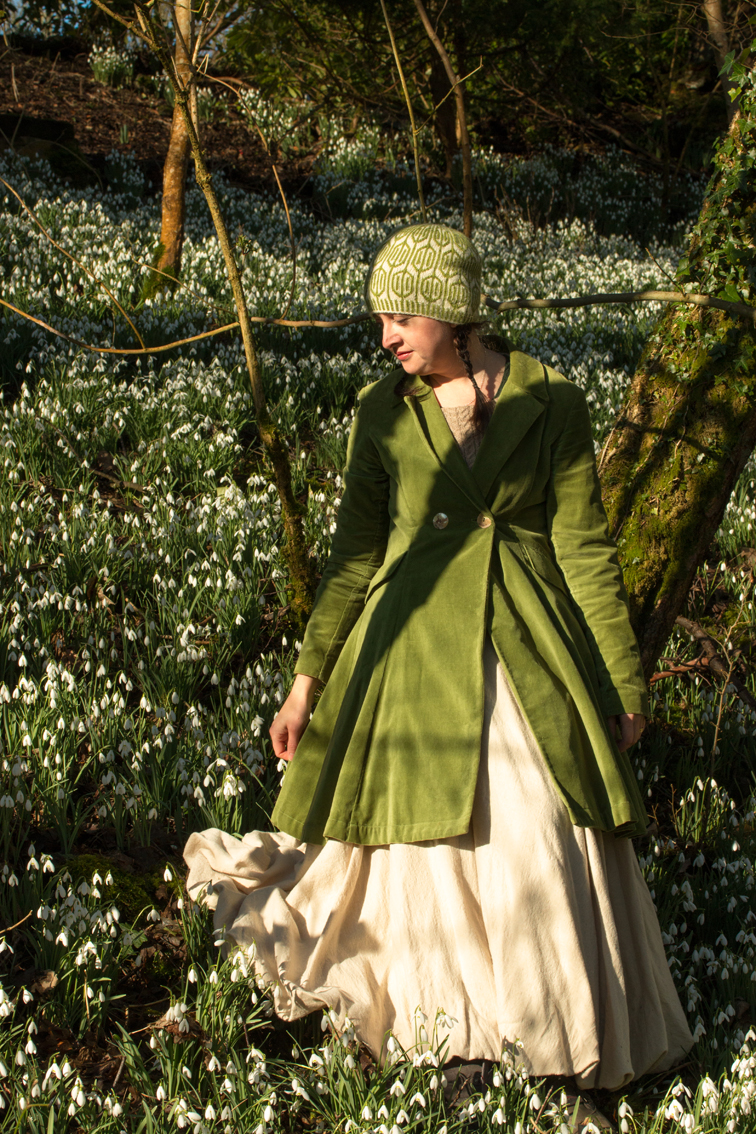 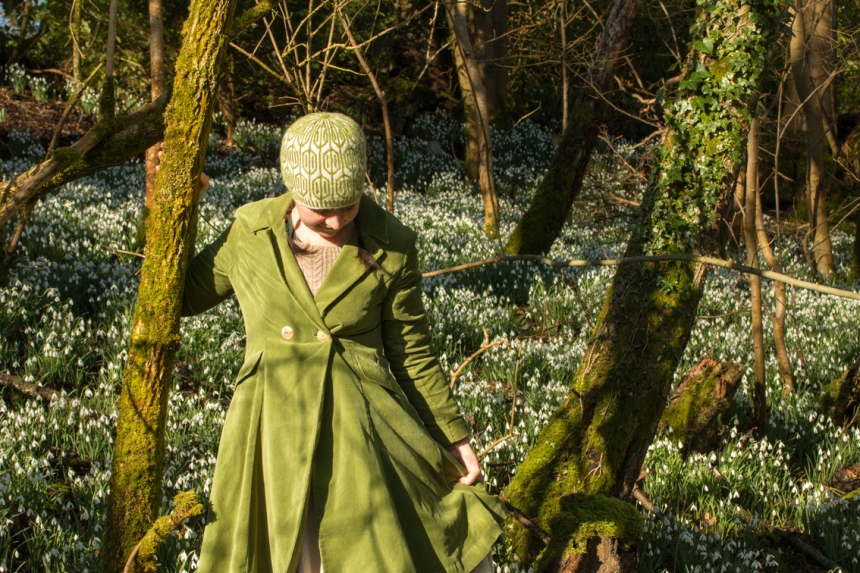 How lucky were we with these photographs? I saw these snowdrops coming out in the woods a few miles away, and decided I would style the hat around them. We picked a lovely early-spring morning, and everything looked just right. 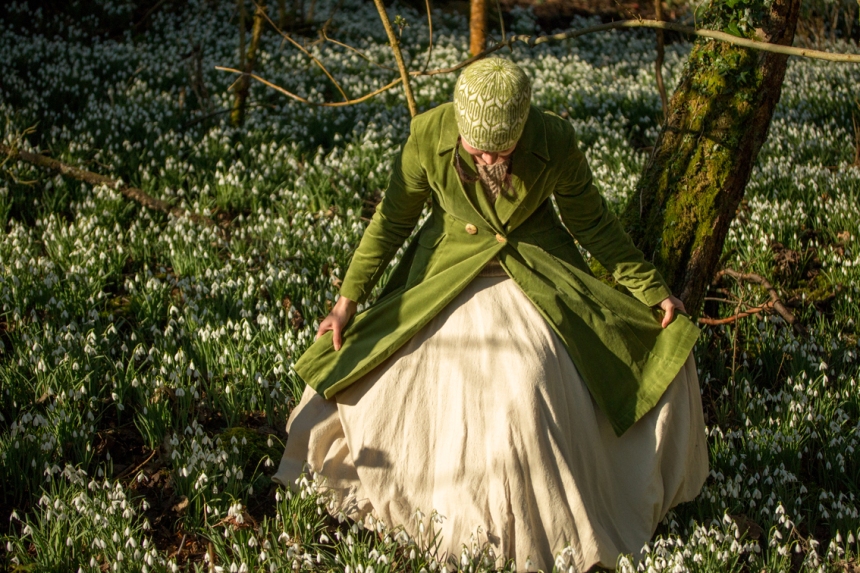 Thanks to Tom, as always, for some superb photography. 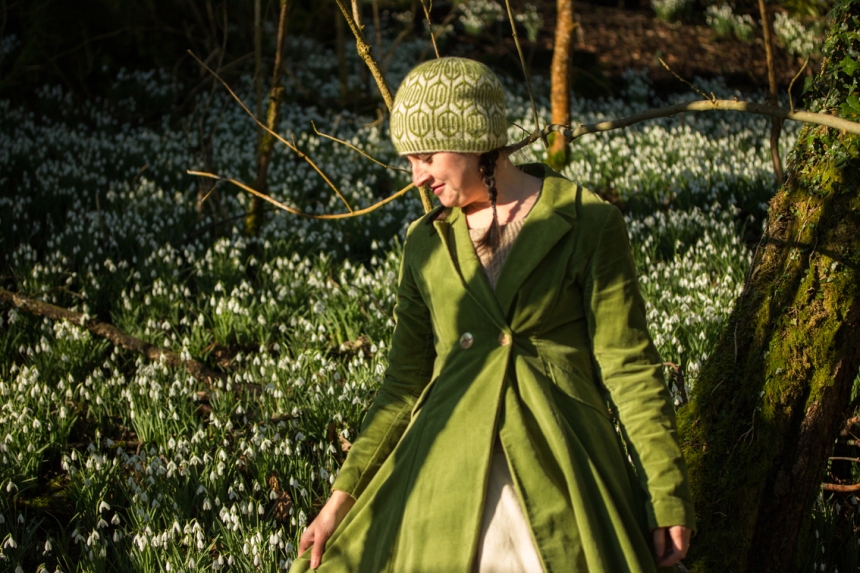 I’m strongly feeling the need for green right now, and have made this FUNYIN in the very springlike Buachaille shades of Ptarmigan and Yaffle, but you could of course knit one in whatever shades you liked. Mel has created a fabulous version, in which her chosen shades shine almost luminously against each other. We’ll have this on display at our stand at Edinburgh Yarn Fest, so come along and admire it! 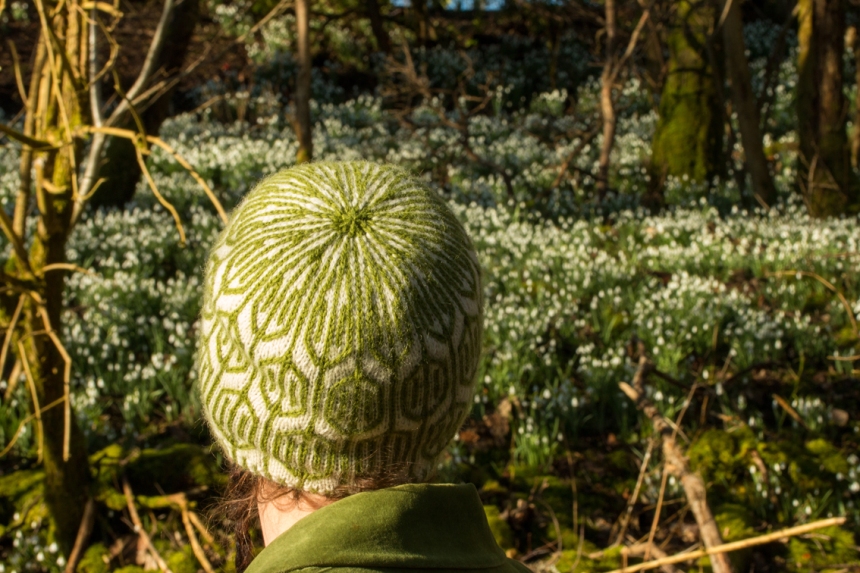 Like my other recent design, Miss Rachel’s Yoke and Gauntlets, I am launching Funyin at Edinburgh Yarn Fest as a kit this coming Friday. And if you aren’t coming to Edinburgh, the kits will launch in my online shop on Friday too. (I will be sending out the special offer for newsletter subscribers on Thursday in advance of the launch, so do watch your inboxes!) Finally, if you aren’t interested in a kit, but are keen to knit this pattern – worry not. The Miss Rachel and Funyin designs will also be available to download separately from Ravelry on Friday morning too.

I’ve a busy week ahead so thought I’d get this information out now for those who are asking!

The Funyin and Miss Rachel designs will launch in all formats on: 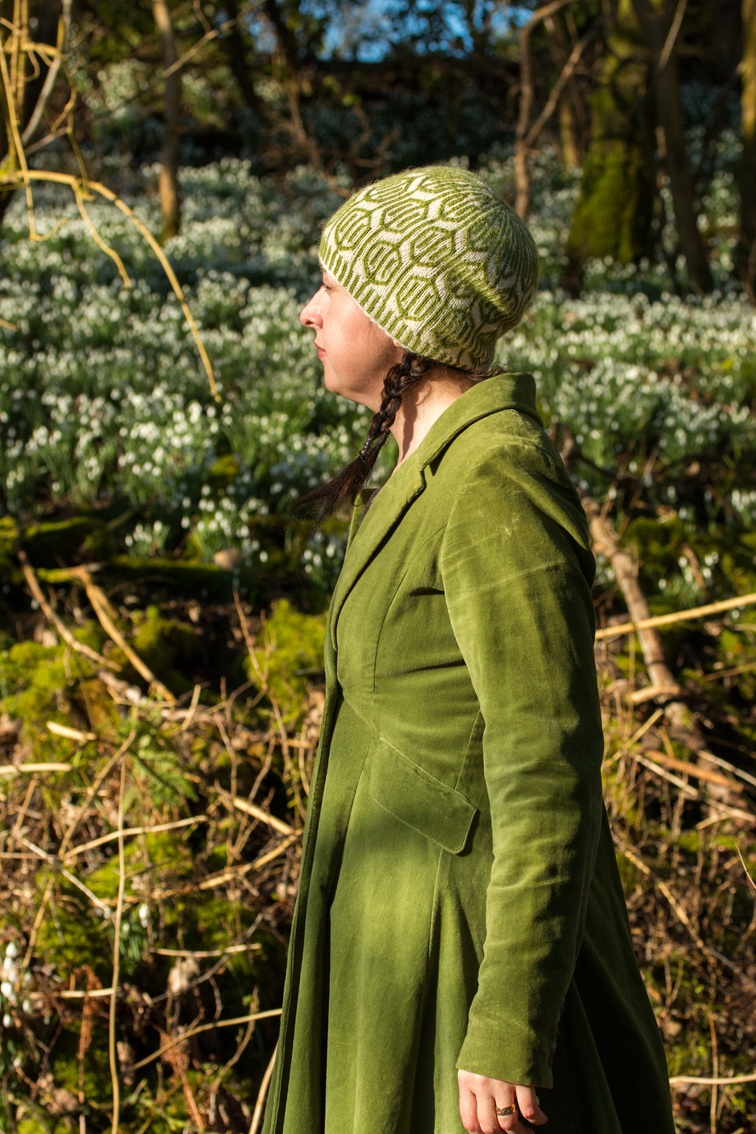