A few weeks ago, I visited the home of the UK Knitting and Crochet Guild – a fantastic organisation that exists to support and promote the crafts of knitting and crochet.

The KCG is supported entirely by charitable donation, and is staffed by a group of wonderful volunteers, who administer a growing international membership; organise events and trunk shows; produce a quarterly newsletter; and preserve the guild’s important collections, which are now housed at Lee Mills in Yorkshire. 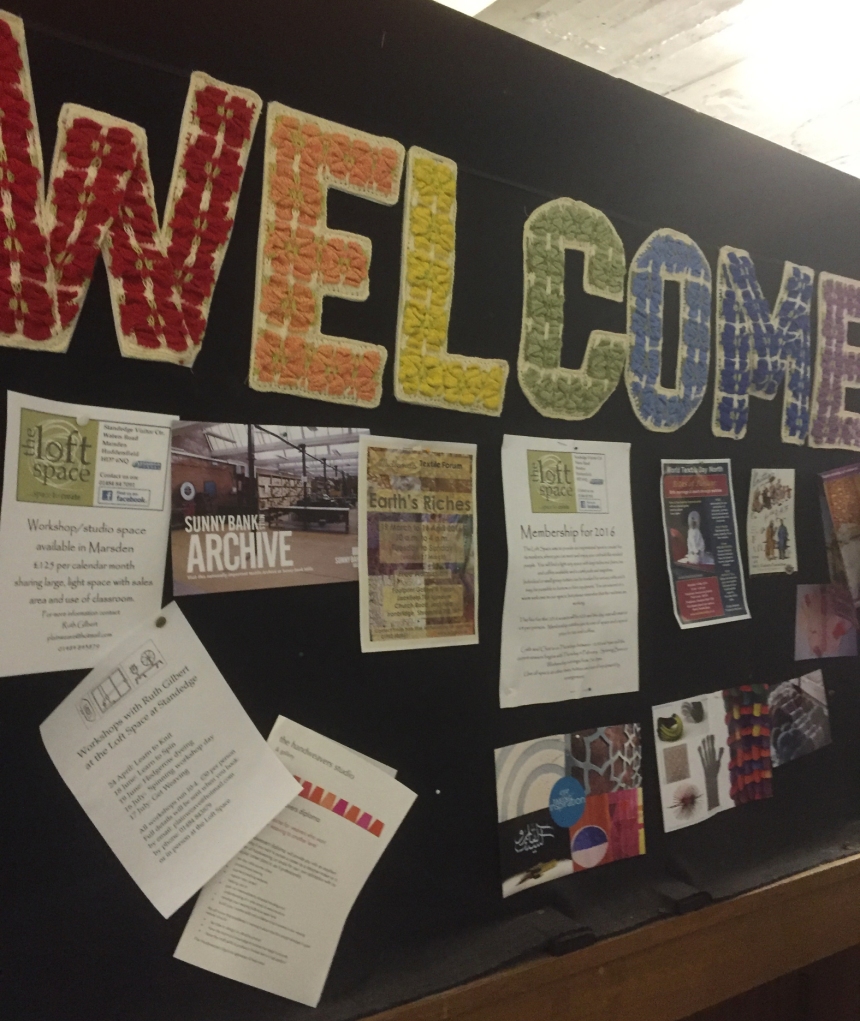 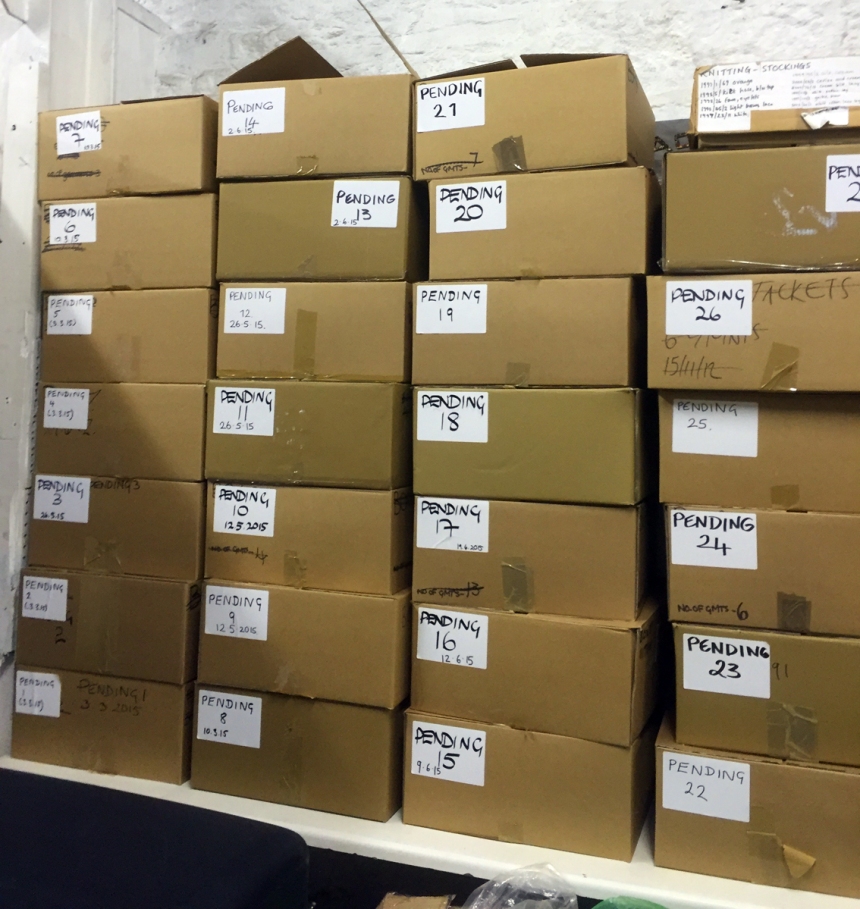 The KCG collection – or a particular item in it – was the principal reason for my visit. 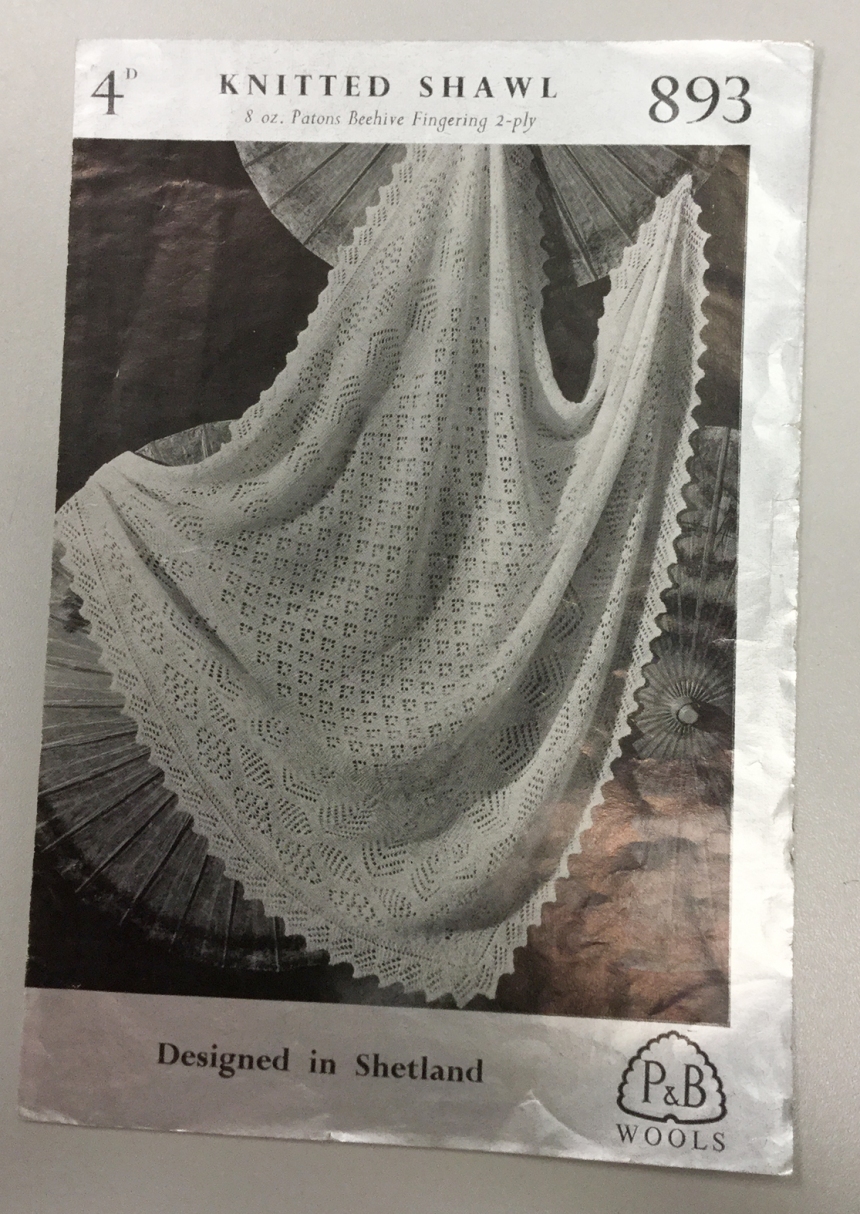 A wee while ago I posted here about this pattern, and asked if any of you had knit it, or knew anyone who had. I received so many wonderful and informative responses, which have helped me in my research, some of which I’ve been able to include in a special chapter in my new Haps book (whose publication is now imminent). The connection between this pattern and the Knitting and Crochet Guild is that its prototype – the hap that was actually its basis – is held in their collection. 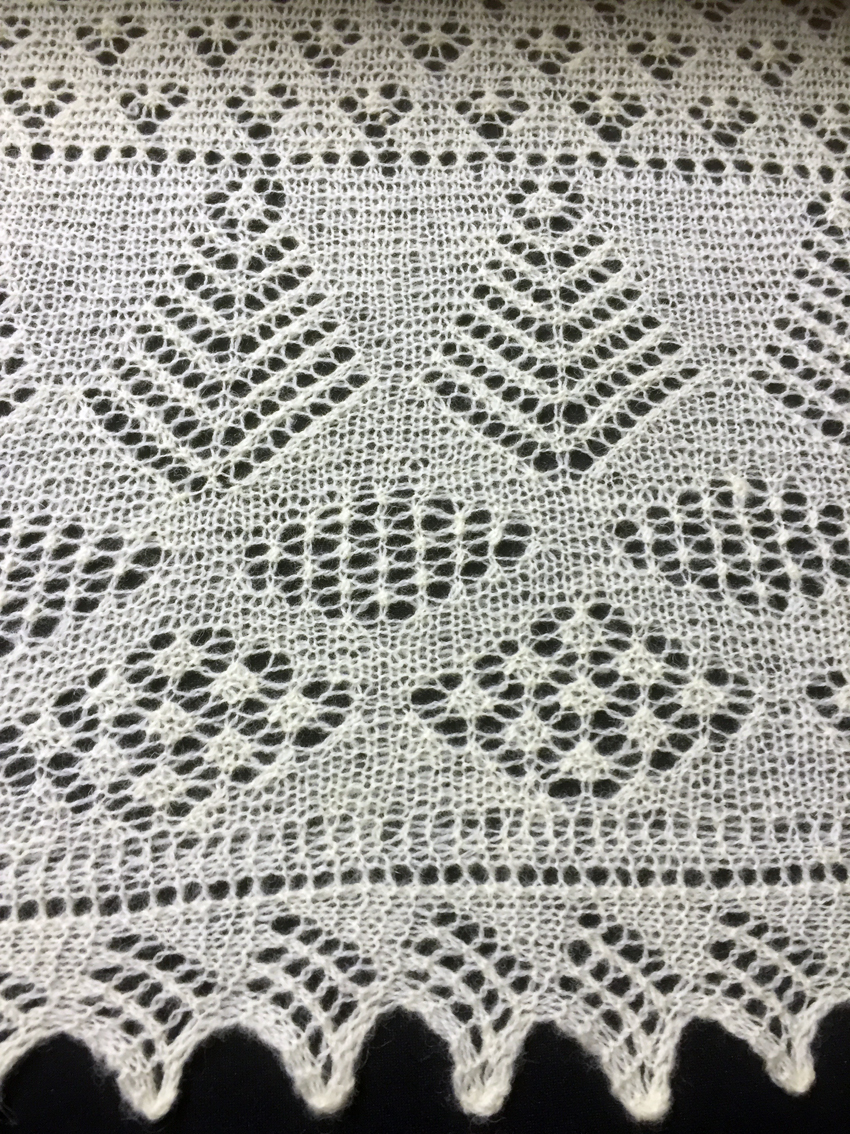 This hap was purchased at the turn of the 1950s by the infamous James Norbury, who was at that time Patons & Baldwin’s chief pattern writer. Norbury visited Shetland several times, and collected many original items of knitwear from there, as well as from elsewhere around the world, which he then used as the basis of the phenomenally popular patterns he created. There are several Shetland pieces in the Guild collection that are of a type we’d now describe as “fancy haps” (about which you’ll hear more in my book.) All were, apparently, the work of the same woman – a resident on the Shetland island of Unst, whose lace knitting Norbury very much admired. 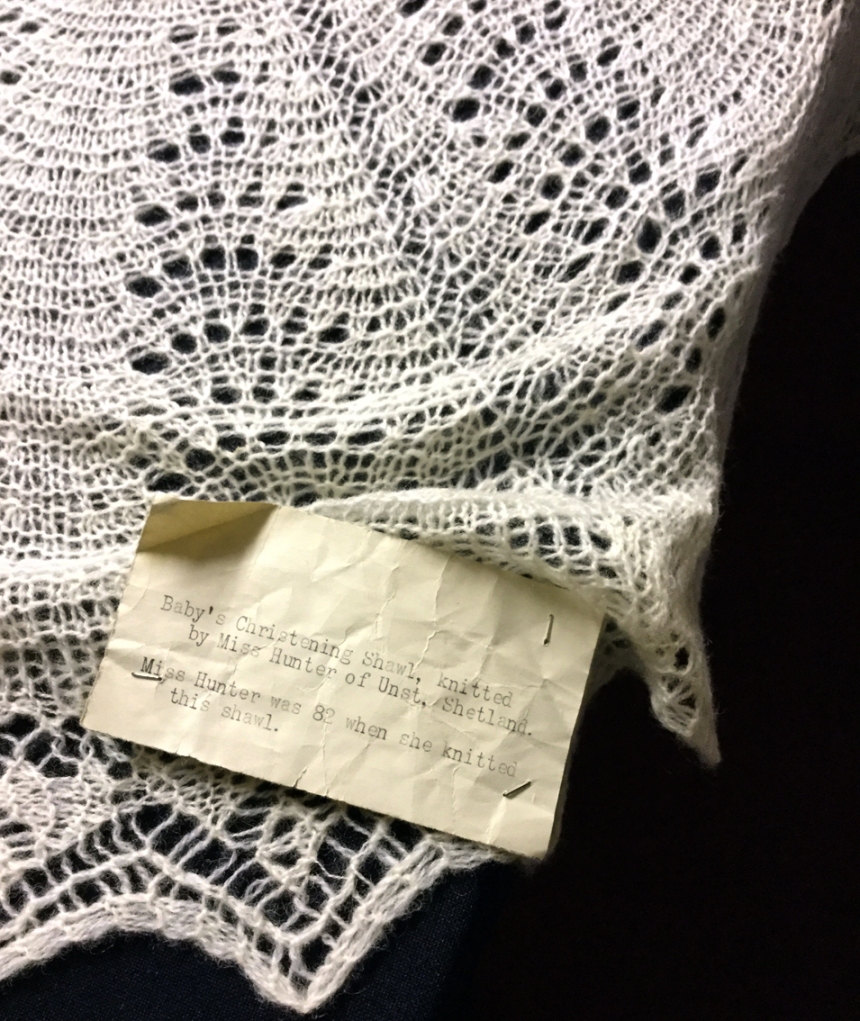 (the label has been stapled (horrors!) onto the sample probably for use in a trade show display more than 50 years ago. It came to the KCG collection like this and has never been removed).

Norbury mentions Miss or Mrs Hunter several times in his publications. Her identity has heretofore proved something of a mystery to researchers, and for a while I’ve been willing to assume that she was a fiction, or a composite of several different knitters, that Norbury invented to legitimise his work (Norbury was, in countless respects, a master of invention). However, I’m now of a different opinion, and I’m hopeful that (with the kind help and generosity of some of my Shetland friends) I’ve managed to identify the original knitter of this world-famous pattern in my new book. 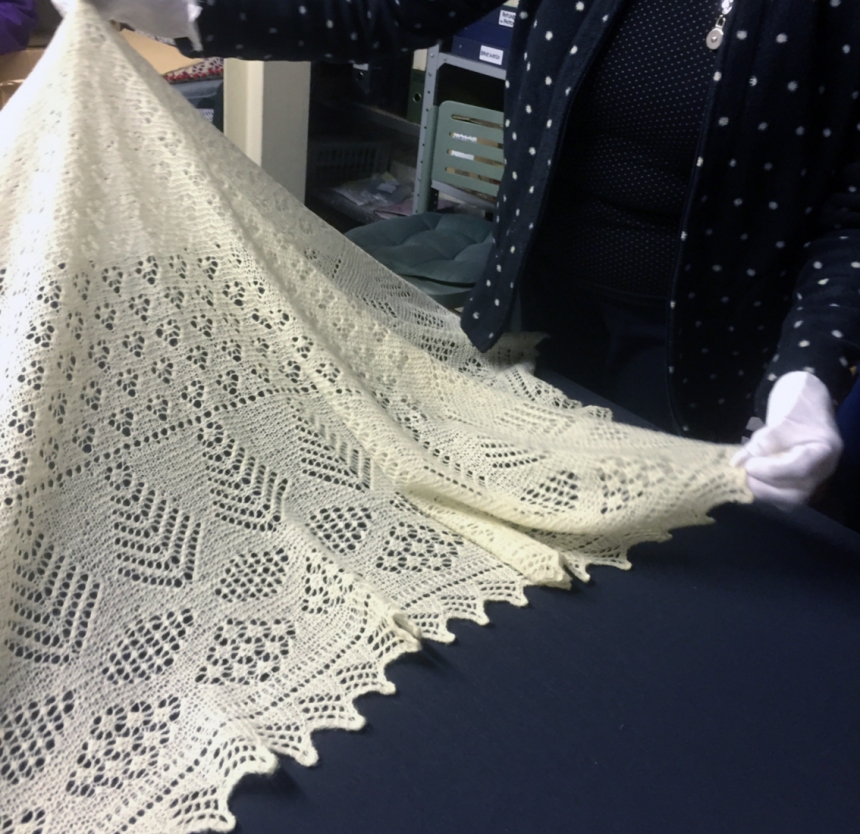 I had been looking forward to seeing the original piece for weeks, and it was tremendously exciting for me to finally be able to do so! I wanted to examine it closely because I was interested in how it had been knitted, and to what extent Norbury and his team had altered its fabric and construction when producing their popular pattern. 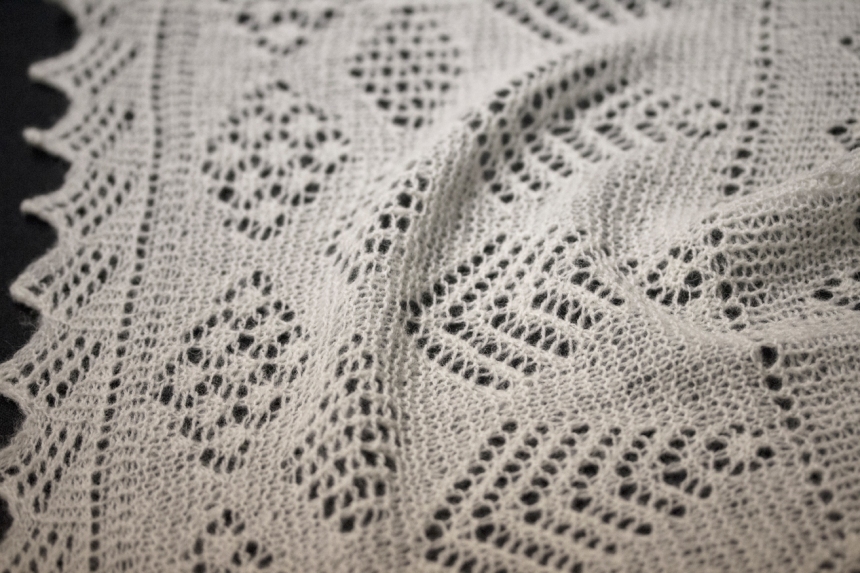 The original is still in wonderful condition and has been incredibly beautifully knitted – clearly the work of a lace knitter of talent and experience. The Patons & Baldwin pattern is written to be constructed in six separately seamed pieces, and this is how the majority of knitters work this hap, following Norbury’s instructions. But while Norbury copied the original’s stitch patterns verbatim, he did not copy its construction in any way at all. The original hap, of course, has been made in the customary Shetland fashion – following the method by which most haps were knitted, and continue to be knitted, in those islands today. You will be able to read more about this in my book, where I also suggest how this wonderful hap speaks to a bigger narrative of the systematic re-writing of the original work of Shetland knitters to fulfil the demands of a global, commercial knitterly marketplace. I think it is is an interesting story.

The Knitting and Crochet Guild – who do such fantastic work preserving original textiles such as those collected by James Norbury – have helped me to tell this story, and it is thanks to them that I was able to trace the Patons & Baldwin pattern back to its original source in this this beautiful fancy hap, created over half a century ago by a wonderful Shetland lace knitter. I want to say thanks to all the guild’s volunteers, and particularly to Barbara Smith and Angharad Thomas, for their assistance. I’d also like to encourage you, if you have not already done so, to support the work of the KCG by becoming a member. Membership starts at just £25, brings many benefits (including access to hundreds of free downloads from the guild’s collection of vintage patterns) and you don’t need to be resident of the UK to join.

Thankyou so much, KCG!