One of the many things I really like about the communities and cultures of crofting is their distinctive effect on the way people work. What I mean is this: in towns and cities, jobs tend to become more and more specialised, people do what they do within smaller and smaller categories, individual work occurs in an ever-narrowing compass. Many different things are obviously involved in managing a croft or smallholding: things involved with the land, things involved with animals, things involved with maintaining dwellings, fences, and all the built infrastructure of one’s livelihood — a lot of tough outdoor work alongside countless time-consuming indoor tasks. But, if you live and work in one of these communities, you are also likely to have many different jobs beyond the radius of your croft. As well as running sheep and raising crops you might have established a small business from your kitchen: baking, selling, and distributing cakes and pies. You could have discovered you have a real feel for carpentry, which means you are occasionally contracted to work on neighbouring renovation projects. You might take on seasonal work fishing, running a small taxi service for island visitors, or doing a few hours in a local shop or cafe when things become busy with tourists. You might have set up a 3D printer or die cutter in one of your sheds, and sell the products you make on eBay. Your interest in your local environment might have led you to acquire an advanced qualification in archeology or entomology, which in turns means that you are sometimes contracted by a regional trust to collect and record data. You may have also found increasingly creative ways to explore and express the profound nature of your own connection to your landscape in words or in wool, with music or on canvas.

That the extraordinarily diverse multi-tasking world of crofting and smallholding is sustainable (making the most of one’s local resources; existing in a generally low-impactful way) really goes without saying. That the work involved is also really hard (and often performed out of necessity) goes without saying too.

I found myself thinking about the distinctively croft-y division of labour and its relationship to everyday creativity a lot while I was working on Shetland Oo and chatting to friends like Donna Smith, Chris Dyer, and Emily Poleson about the textures of their daily lives. I was prompted to think about it again last week when I met Meg Rodger and her husband Andrew who, with their two boys and a flock of Hebridean sheep, live an extraordinarily resourceful life on the isle of Berneray, completely interwoven with the landscapes they respectfully inhabit.

With long-standing family connections to Berneray, Andrew and Meg relocated to the island a couple of decades ago. Together, they painstakingly and carefully restored a traditional (and very beautiful) Hebridean blackhouse and later, the croft at Sunhill, where they now live and work.

Andrew is a marine scientist. He shares his knowledge and expertise through a range of local and regional projects, as well as through the tours he organises around the Sound of Harris, where visitors learn about the marine wildlife and human heritage of the Hebrides. (And I feel I must also mention that Andrew was one of the hardy crew of a reconstructed Birlinn who rowed, on an extraordinary voyage, to and from the Faroe islands in 1992).

Meg and Andrew keep Hebridean sheep. Like Shetlands, Hebs are one of those smaller, colourful, goat-y breeds that are superbly well adapted to Atlantic island landscapes: hardy creatures who lamb and overwinter outdoors.

The sheep of Sunhill lamb on the Berneray machair, then travel by boat to the small islands in the Sound of Harris which Meg and Andrew work. Here the sheep spend the summer months happily grazing upon grass and seaweed. 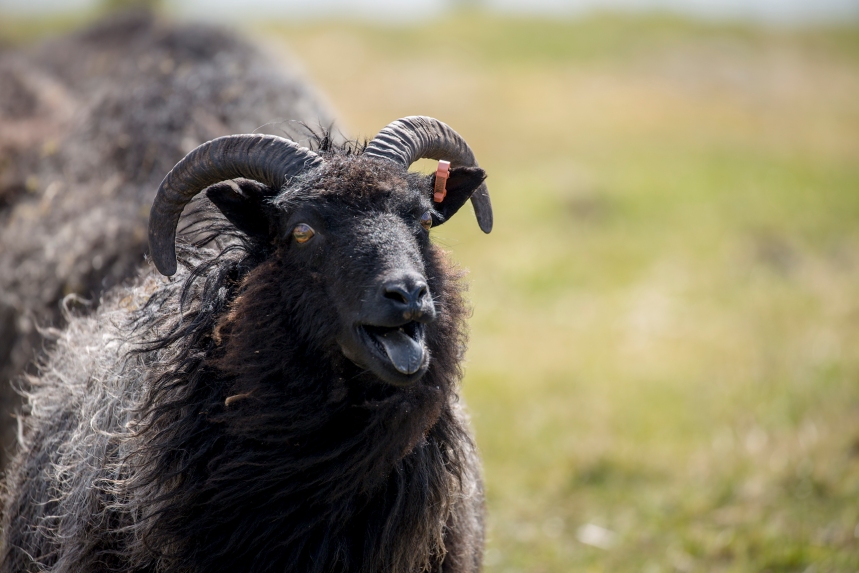 Everyone gets together in late June for shearing . . .

And then, thanks to Meg’s enterprising determination, the fleeces of these wonderful sheep are transformed into FABULOUS YARN. 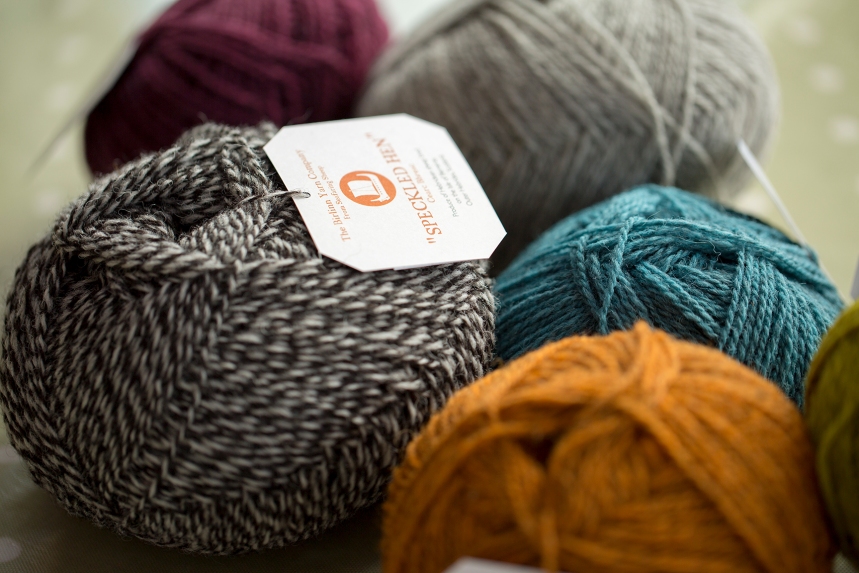 Meg established the Birlinn Yarn Company in 2015: the name referencing the Norse heritage of her sheep, as well as their distinctive seafaring nature. I suggest you pop over to Meg’s website immediately to see the beautiful range of colours she has achieved by overdyeing natural fleece shades with organic dyes, and to read more about the background and evolution of Birlinn Yarn. 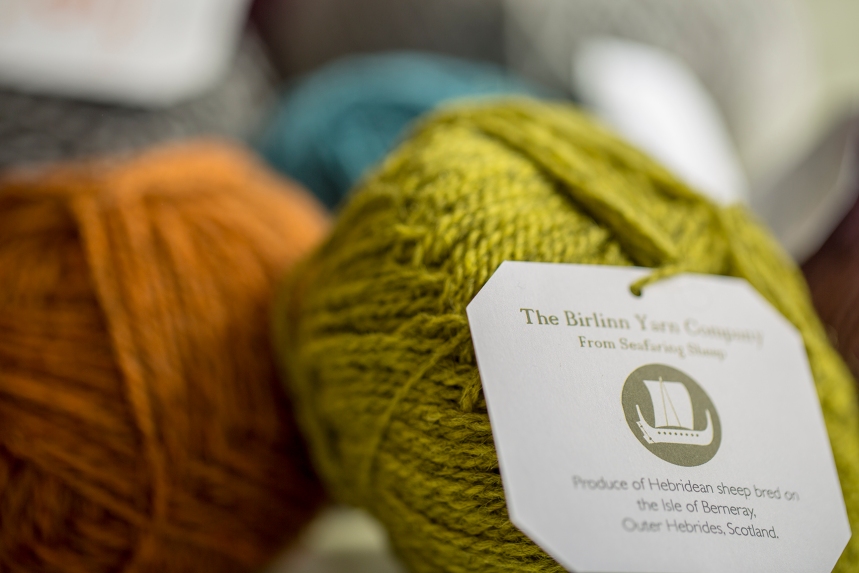 I know just how hard it is to develop a great local yarn from scratch on a small scale- all the learning you have to do about processes and suppliers; all of the decisions that you have to make (many of which can be tricky or difficult); all of the things that can (and do) go wrong; the massive amount of incredibly hard work that is involved in manufacturing a really good thing which you believe in, and getting it to market. So I’ve been admiring what Meg is doing with the Birlinn Yarn Company for a good while now.

I was looking forward to meeting Meg, the sheep raiser; Meg the producer of beautiful yarns from her own animals; Meg, the all-round inspiring crofting businesswoman. But I hadn’t quite expected to meet Meg, the generally extraordinary creative talent. 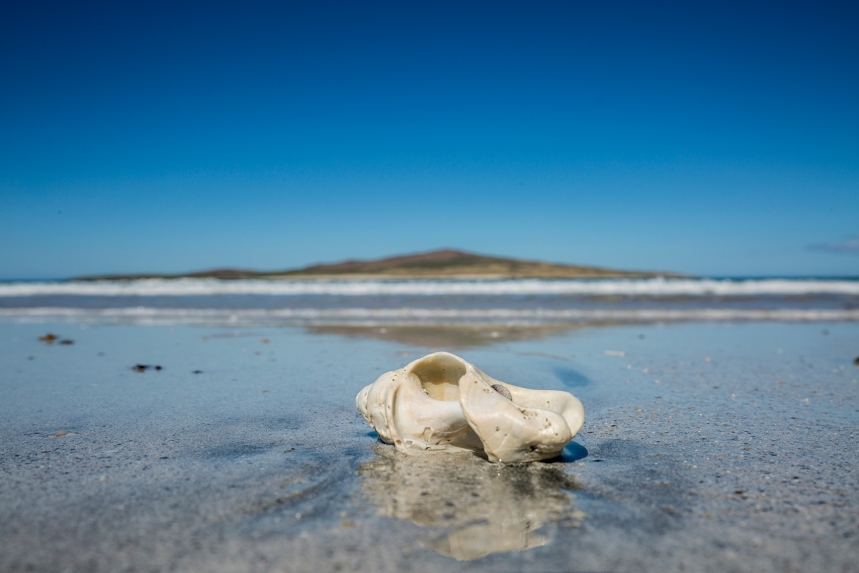 For Meg is also a brilliant environmental artist, continually making and creating and responding to the landscape in which she lives and works.

To say Meg’s work is “elemental” doesn’t really do it justice. It’s more like she’s developed a new kind of language, a very particular way of communicating and telling the story of Hebridean air, wind and weather.

On the morning we visited Meg, the storm barrel she’d installed on her back deck at Sunhill was hard at work drawing the wind, recording in its own way the conditions of the landscape, documenting time itself. Tom and I were really blown away by it, and by what Meg was doing and saying in her art. 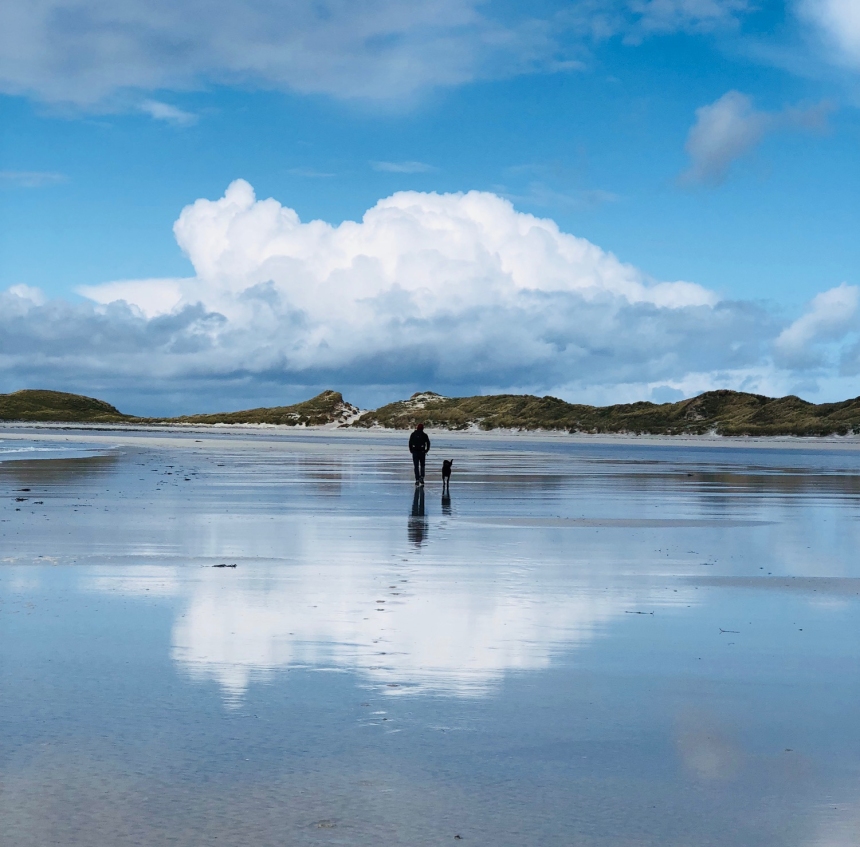 Then later that day, we were almost quite literally blown away on a particularly wild walk around Udal: a North Uist headland and site of an amazing Iron Age wheelhouse.

Now, you may already know that I dearly love a wheelhouse (their petal-shaped walls inspired the crown of my Scatness Tam ) and I’ve now seen a few examples, but seriously: the one at Udal is really incredible.

Those weathered blocks of gneiss with their ice-cream strata

. . . the primroses blooming around the stones

. . .the contrast between the crazy Atlantic weather and the cosy well-built dwelling

. . . the sense of a landscape both weather-wild and pastoral, with cattle grazing and tatties being planted just beyond the wheelhouse walls.

This was a really tough walk for me (involving several hours and miles, strong winds and a freak hailstorm), but it was an exhilarating walk as well. At the end of that afternoon I really felt I’d achieved something physically, and gone somewhere new, both in body and mind. Then, when we returned to Berneray, Meg kindly offered us the drawing that the wind had made in her storm barrel that afternoon. Just wow!

There are so many things I love about Meg’s work, but one of the elements I most admire is its humility (a quality not all that common in contemporary landscape art or photography). Meg is the work’s creator, but she’s simultaneously absenting herself from the work in a way that has a lot to say about the transitory and insignificant nature of the contemporary human against the general large-ness of the Hebridean landscape, time, change and natural history more generally. 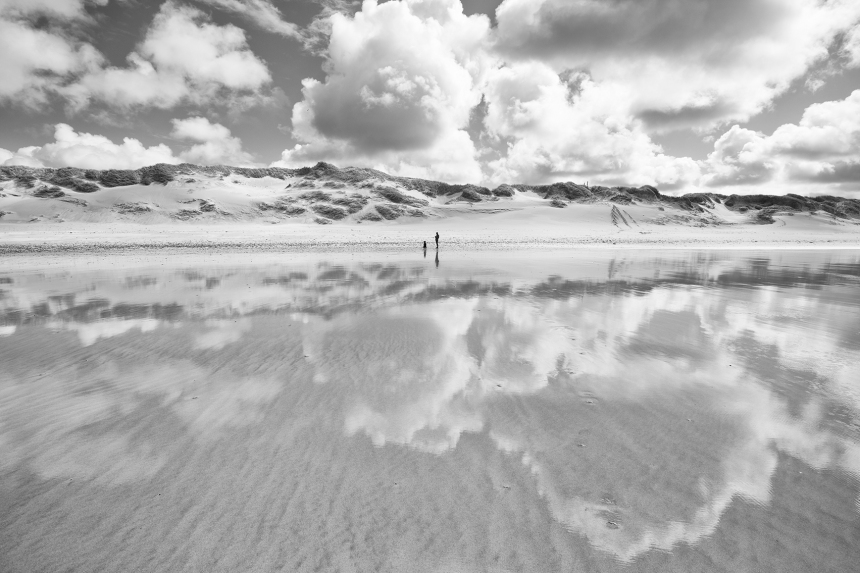 The wind drawing of that day means an awful lot to me. 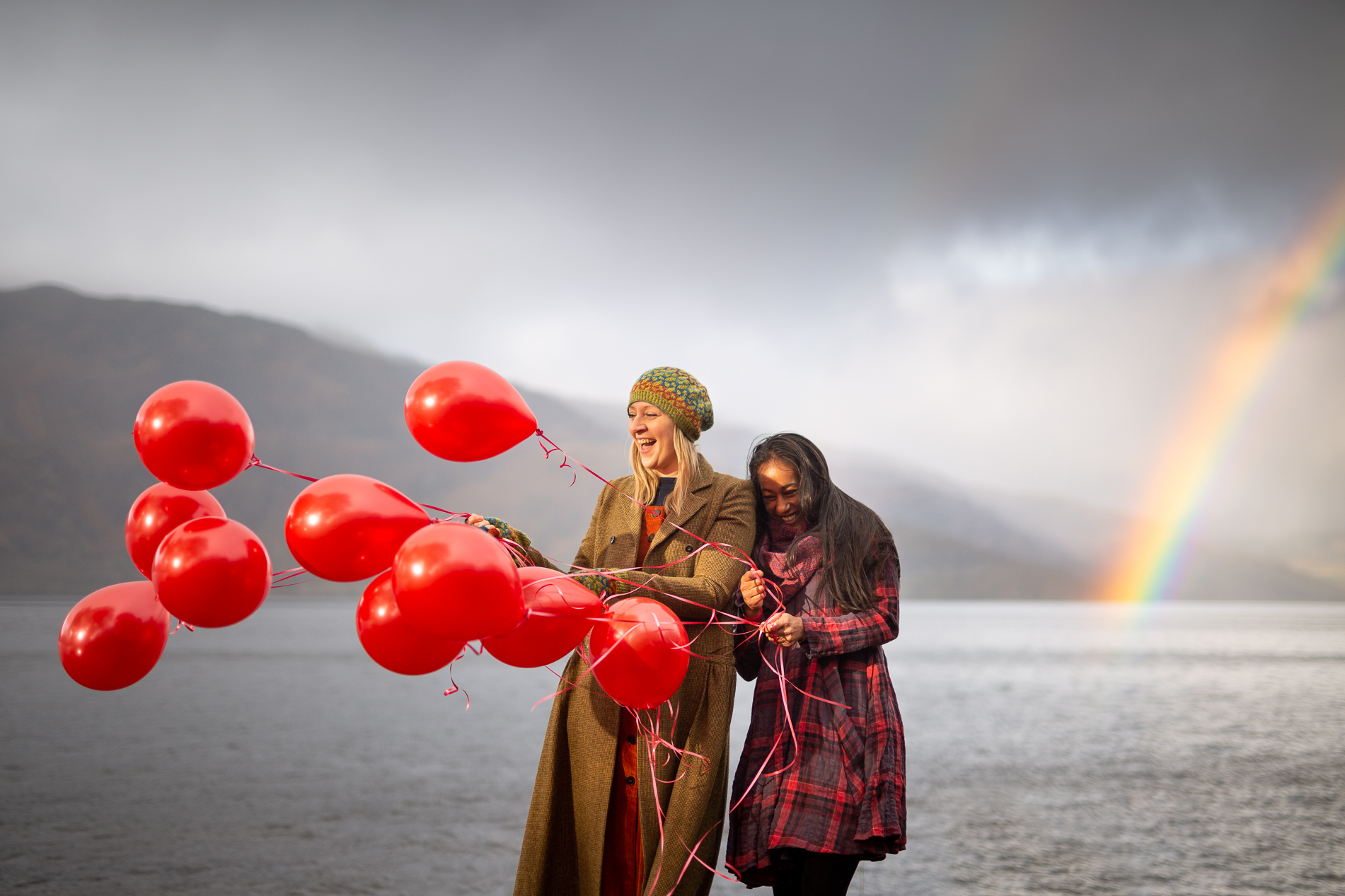