The weather has been unusually hot, so I decided to go swimming in Carbeth Loch. 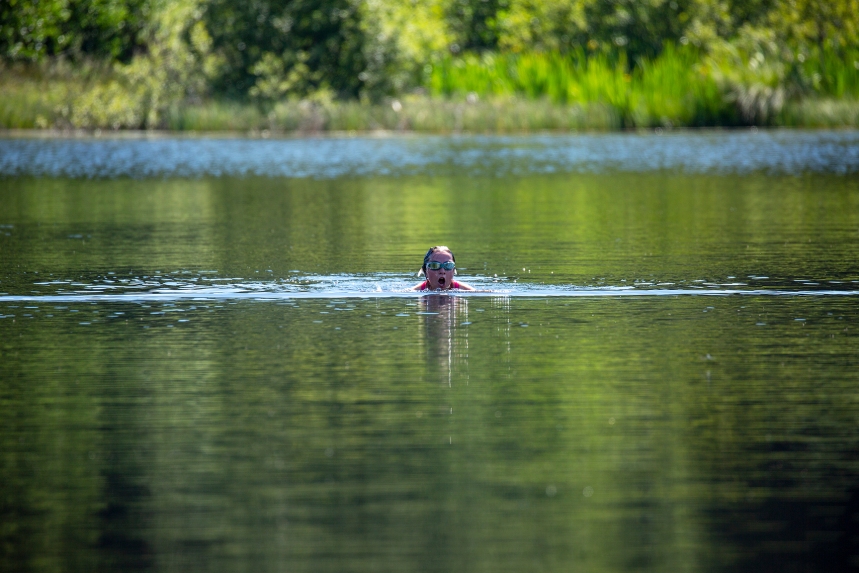 You may remember that I wrote a couple of years ago about how hard it was for me to, um, take the plunge and begin swimming in a pool again. Since then, I’ve done a lot of pool swimming and it has helped me enormously. But it’s also been a bit difficult at times. Because of my lack of balance, my body can veer off course in a way that makes pool swimming tricky, unless one has a very understanding lane partner (which for a time I found, in a lovely local elderly man). But it can be a bit tiring having to introduce one’s disabilities to every person one encounters at a pool, and I have also met with a certain lack of understanding among pool staff, and particularly among some parents, who don’t understand that it’s not a great idea for kids to be nipping in and out of a lane in which I happen to be trying to swim crawl (freestyle). I timed pool visits during quiet periods . . . I avoided school holidays . . . but I am sorry to say that a few months ago these exchanges put me first off trying to improve my crawl . . . and then finally off the pool itself – and the upshot is that I’ve not been swimming for a while.

Since then it has been in the back of my mind to try fresh water swimming – and I’m really glad I did – because it feels amazing.

Tom made a short film.

These two and a half minutes involved two separate swims, and three different cameras. Thanks, Tom.

When I look at Tom’s footage, I can see just how significantly the past two years of swimming have helped me. On a general everyday level, in my post-stroke body I feel uncomfortable pretty much all of the time. I’m continually aware of being lopsided, of my left side moving hesitantly or behaving unpredictably, of the feeling that my brain is continually ‘working’ to keep my left arm and leg operating in tandem with my right. Simply being in my body feels effortful, and I am always aware of the unbalance between my left and right sides even when I’m just sitting still. In a very basic way, I often feel it is impossible to simply relax in my own skin. But in the water, my body is supported. In the water, the movement of my stroke-affected limbs feels much more natural and, though I am still aware of the weakness of my left side in comparison to my right, I have a much greater sensation of balance than I do when I’m walking, for example. Swimming means my limbs can move at what seems like speed to me, and with something that feels like ease – a simple sensation which I very rarely feel (and whose absence has been one of the hardest things for my body to deal with in the 8 years since my stroke). Swimming has helped my bilateral movement, my balance, and it has clearly helped with my body’s strength as well. In the water I just feel physically capable. On land I rarely have that feeling.

So, if you’ve had a stroke, I would heartily recommend experimenting with swimming as an exercise (as and when you have enough energy to try it). Swimming has not improved the unpredictable spasticity of my stroke-affected limbs, nor their inability to operate in ‘extreme’ situations of stress or cold, but it has helped enormously with their strength, balance, and co-ordination.

Well, if I’m going to do more open-water swimming in Scotland I think I’ll probably need a wet suit. I’ve never worn one. Any advice or recommendations would be gratefully received.

79 replies to Swimming in Carbeth Loch