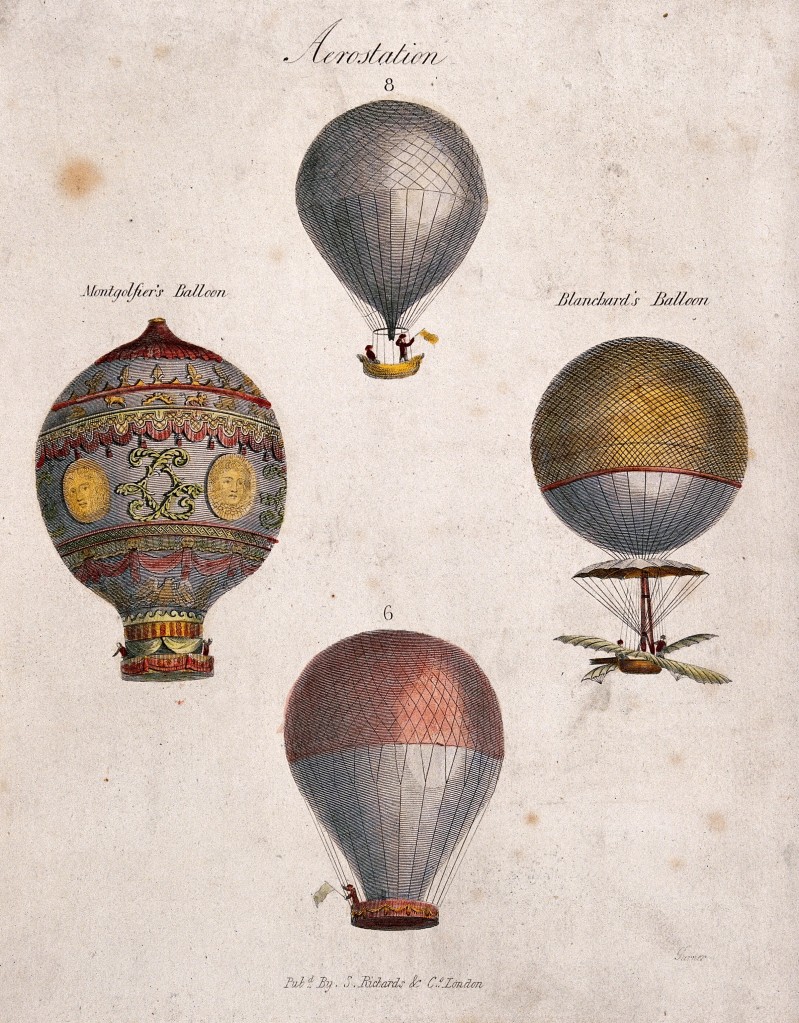 I’ve a long-held fascination with late eighteenth-century hot air balloons and ballooning. In fact, I’ve even knitted an eighteenth-century balloon (in a square of our International Women’s Day blanket, which references the Montgolfier balloon that appears in the final lines of Anna Laetitia Barbauld’s brilliant poem, Washing Day)

In the past few weeks, my historic balloon interests have been further piqued during my research about eighteenth-century Glasgow (of which more in a later post). But why on earth would I find eighteenth-century balloons – or more specifically, the balloons and balloonists of 1780s Britain – so intriguing?

The three years between 1783 and 1786 – which witnessed the first manned (and wo-manned) British balloon flights – were an odd and interesting time. Having just lost the American War of Independence (and with it, the thirteen colonies), questions about British cultural and imperial identity –about what the empire really was or even was for — were pushed to the fore of the national consciousness with urgent debates about the actions of the East India Company and the colonial adminstration of Bengal, which were to culminate in the trial of Warren Hastings. Britain felt confused, tired and deflated. Yet, at the same time that the idea of the nation seemed to be falling apart, stuntmen were inflating gigantic balloons and taking to the air in a series of death-defying – but ultimately pointless – flights that gripped the country.

In the autumn of 1783, as the British evacuated their last positions in American port cities, enterprising paper-makers, the Montgolfier brothers, had begun the first hot air balloon experiments in France, while Swiss chemist, Aimé Argand, flew a small hydrogen balloon from the terrace of Windsor Castle, much to the delight of George III. Suddenly, it seemed, balloons were everywhere, and no one could talk of anything else. “We are all balloon mad,” reported one correspondent to the Morning Chronicle in December 1783, “at every whist party and tea table the conversation turns upon nothing but air balloons.”

On September 15th, 1784, Lunardi took to the air from the grounds of the Honourable Artillery Company in London, and touched down in Hertfordshire a few hours later.

Lunardi’s first flight drew huge London crowds, with estimates of those to witness his ascent ranging in contemporary accounts from 150,000 to 300,000. Everyone knew that they’d seen something extraordinary, breathtaking and spectacular, but quite what it represented no-one was really sure. Commentators began to speculate about the science of balloon flight, and its possible utility, but the more they speculated, the less certainty there seemed to be about the purpose of balloons. Samuel Johnson told Hester Thrale that he had no idea “what balloons were for” and, wearied by endlessly enthusiastic accounts of the spectacle of Lunardi’s ascent from his correspondents, suggested to Joshua Reynolds that he could talk about whatever he liked in his letters as long as he did “not write about the balloon.” But it seemed everyone else did want to talk about it: The Gentleman’s Magazine established a special section for “balloon intelligence” and, in the year that followed Lunardi’s first flight, over 180 British balloon ascents were attempted.

Balloons became high fashion. The Prince of Wales appeared at court in a balloon-adorned outfit and fashionable young women could choose a Lunardi garter or a Lunardi bonnet (as memorably noted by Robert Burns’ in his poem, To a Louse)

Balloon ephemera proliferated. The enterprising Lunardi was very canny at marketing himself: he and his balloon rapidly appeared on tokens and medals, snuff boxes and umbrella tops, plates and ribbons.

And if balloons became high fashion, then they, of course were ripe for satire too. Countless ribald prints appeared in which predictable parts of the human anatomy were subject to inflation or deflation 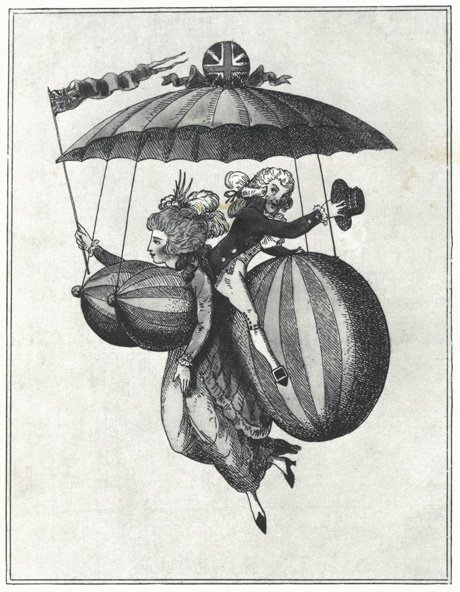 If you enjoy eighteenth-century humour, then a lot of these balloon images are certainly very funny. There’s an awful lot you can do, satirically, with an empty vessel and some gas – and that’s precisely why the balloons of the 1780s fascinate me so much.

In early 1780s Britain, balloons are a rich symbol of a particular place, a particular moment wrestling with itself.

What might a balloon represent? A nation whose sense of its imperial self had been so grotesquely over-inflated, that it now failed to recognise the hollow emptiness at its own heart?

A nation whose capacity for theatrical self-delusion knew no bounds?

A nation whose civic culture was now utterly debased by scams, frauds and endemic corruption, but which merely continued to enjoy the spectacular novelty of its own demise?

A nation in whose inflated boosterism was found the recipe for its own self-implosion? whose imminent deflation might be just as extraordinary as its earlier expansion? 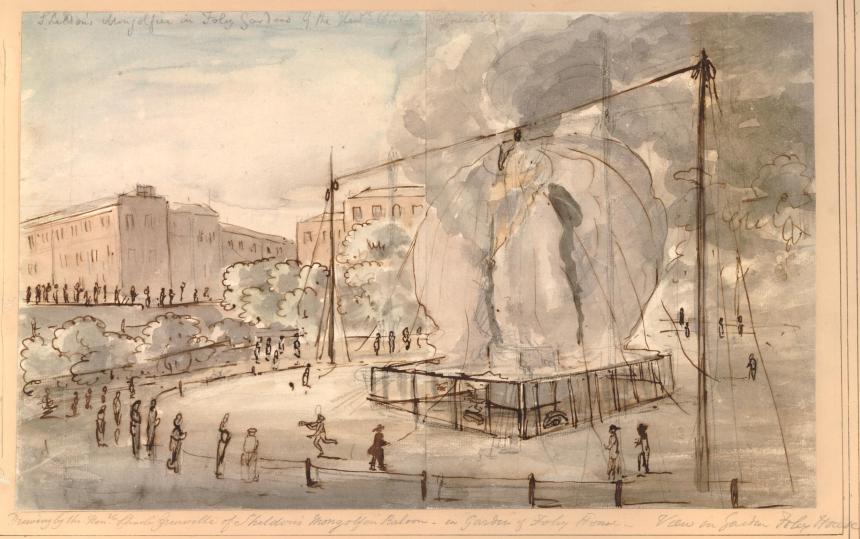 In the balloon ascents of the early 1780s, Britain saw something that seemed simultaneously completely miraculous, and entirely inconsequential. And it saw exactly the same things as it gazed upon itself.

The first balloon flights happened at a moment of particular British cultural uncertainty: a moment in which everyone seemed to be continually striving for some meaning and some clarity, only to discover that all that was out there was a whole load of hot air.

I’m fascinated by the balloons of the 1780s because of what they carry along with them in their extraordinary flights: because of their particular capacity for gathering together all of Britain’s anxieties, blowing them up, and happily popping them like a bubble. I love how balloons can act simultaneously as a celebration and castigation of British popular culture; how they encapsulate the nation’s uncertain sense of itself and the distinctively weird creative energy of a moment in which a man might fly beyond the clouds — to no purpose whatsoever. I love how discussions of balloons can combine faith in human progress with fears of humanity’s imminent collapse or bring together an incipient critique of the eighteenth-century society of the spectacle, with the idea that the spectacle might also be an end in itself. And it is these particular contradictions that I also love so much about the balloon-themed conclusion of Anna Laetitia Barbauld’s Washing Day. I have often thought that her transition between the image of the soap bubble, blown by the bored child on a busy washing day, and Montgolfier’s hot air balloon, moving “buoyant through the clouds” is truly one of the most audacious images in eighteenth-century poetry, which Barbauld, with typical poetic adroitness, also somehow manages to make spectacularly self-deflationary:

sometimes through hollow hole
Of pipe amused we blew, and sent aloft
The floating bubbles; little dreaming then
To see, Montgolfier, thy silken ball
Ride buoyant through the clouds, so near approach
The sports of children and the toils of men.
Earth, air, and sky, and ocean hath its bubbles,
And verse is one of them — this most of all.

I do hope you don’t mind my indulging my eighteenth-century balloon-o-mania, especially as further flights follow in a subsequent post!

If you’d like to read more about eighteenth-century balloons and ballooning, there’s a short chapter in Richard Holmes Age of Wonder (Harper Collins, 2008), or a longer and more thorough discussion written by my old friend Paul Keen in his Literature, Commerce and the Spectacle of Modernity, 1750-1800 (Cambridge University Press, 2012). I’m also indebted to volume 6 of M. Dorothy George’s wonderful Catalogue of Political and Personal Satires in the British Museum (1938). With the rest of London in 1784, Barbauld paid a shilling to visit Lunardi’s balloon, suspended from the ceiling of the Pantheon, writing to her brother John Aitkin that “the sight of friends excepted. . . nothing, has given us so much pleasure as the balloon.”