Panel 94: Hill and Adamson The silver herrings and striped petticoats of the Newhaven fisherwoman.

In the comments on yesterday’s post, Heather linked to an interesting take on the “when is a tapestry not a tapestry” question from a tapestry weaver who strongly objects to the misappropriation of the term in reference to non-woven textiles. I am often struck by how textiles, more than other disciplines, seems prone to practices of woeful mis-naming, and the piece raises many moot points, particularly in relation to the gender associations of the terms “tapestry” and “embroidery.” I suppose this is what I was hinting towards yesterday in suggesting that the term “tapestry” has, in the popular imagination, a public, narrative dimension, that the word “embroidery” does not. It is certainly very sad that this is so, and the linguistic perceptions and politics of these terms in contemporary discourse seem to me quite difficult to unravel. But whether or not the nomenclature of the “Great Tapestry” has a masculine ring, one could certainly never criticise this project for its masculine bias. Women formed the majority of the talented stitchers, and not only are women represented everywhere in the tapestry, but individual panels are used to proudly celebrate the ordinary work of Scottish women in a way that is all too rarely seen in public contexts. A few weeks ago I climbed the Wallace Monument with my dad (who is a Wallace on his mother’s side, and is known by everyone as “Wal”). Half way up the tower we discovered the “hall of heroes” – a sterile space filled with the equally sterile busts of dead white men. While this room commemorates the achievements of Scotland’s philosophical, scientific, military, and literary blokes, there is not a single woman in sight. I scoured the information panels, and finally found Jane Carlyle, who received the briefest of mentions in relation to her husband. Jane and I were the only women in the room, and I wonder if she would have felt as irritated as I did. A wee girl, with a burgeoning interest in Scottish history, might find little in that room with which to identify, while her brother might be reinforced in his tacit belief that only men do important things. One of the many functions of the Great Tapestry of Scotland, it seems to me, is as an educational resource and thank goodness that the project exuberantly and thoughtfully celebrates the important work of Scotland’s women authors, political activists, washerwomen, fisher-lassies, and knitters, and places that work in a public context, alongside more familiar “masculine” achievements.

On with some highlights.

Panel 96: A Caithness School I am alawys drawn to the neeps. By the 1850s, through pioneering rural education practices, Caithness (and Berwickshire) literacy rates were the highest in Great Britain.

Panel 99: James Clerk Maxwell One of many occasions where I was struck by the wit and inventiveness of Andrew Crummy’s wonderful designs. The colourful waves of Maxwell’s beard capture his work on magnetism and electricity.

Panel 103: Shinty and Curling I was bowled over by the beauty and precision of the stitching on this panel, created by Susie Finlayson and Linda Jobson. Look at the tartan! The knitted hose! The herringbone woven jacket! The way the wrong side of the fabric is represented!

Panel 104: Scots in North America I love the figure of John Muir here – the very embodiment of the ideal of the national park.

Panels 105 and 107: The Paisley pattern and Mill Working I found both of these panels incredibly beautiful and moving: the way the faces of the mill workers had been integrated into the famous Paisley pattern, the way the colours of the embroidery precisely echoed those of the Indian subcontinent in panel 92; the sense of energy and movement in the stitching and design . . . and, of course, the fact I was viewing these panels in a mill, in Paisley.

Panel 109: Workshop of the Empire I love the way that industry, labour, and the human figure are represented in this panel. 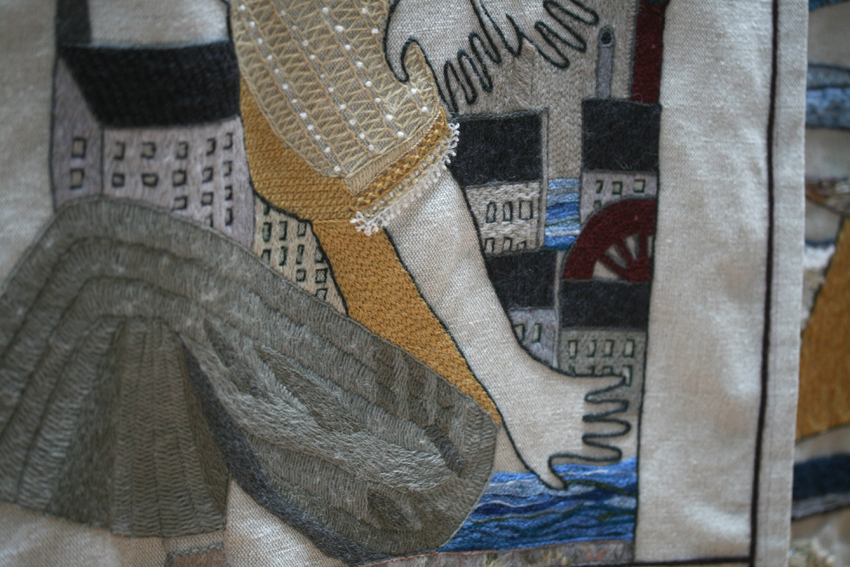 Panel 111: Kier Hardie who campaigned for women’s suffrage as well as worker’s rights. 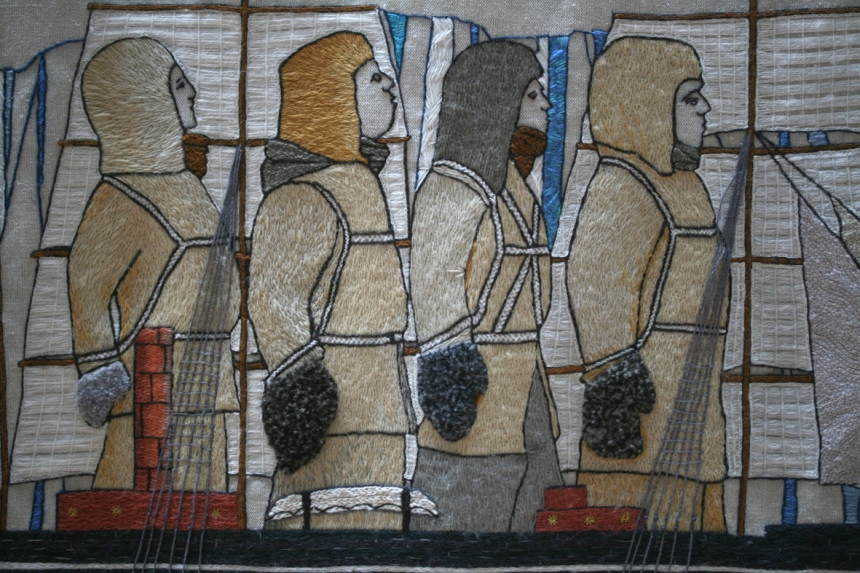 Panel 113: The Discovery sails from Dundee One of the many things I loved about this panel was that the trades involved with the expedition were depicted and celebrated: flesher, tailor, cordiner, weaver, dyer, hammerman, bonnet maker, baker, glover.

Panel 115: The Isbister sisters Shetland knitters! Hurrah! One of my favourite panels. 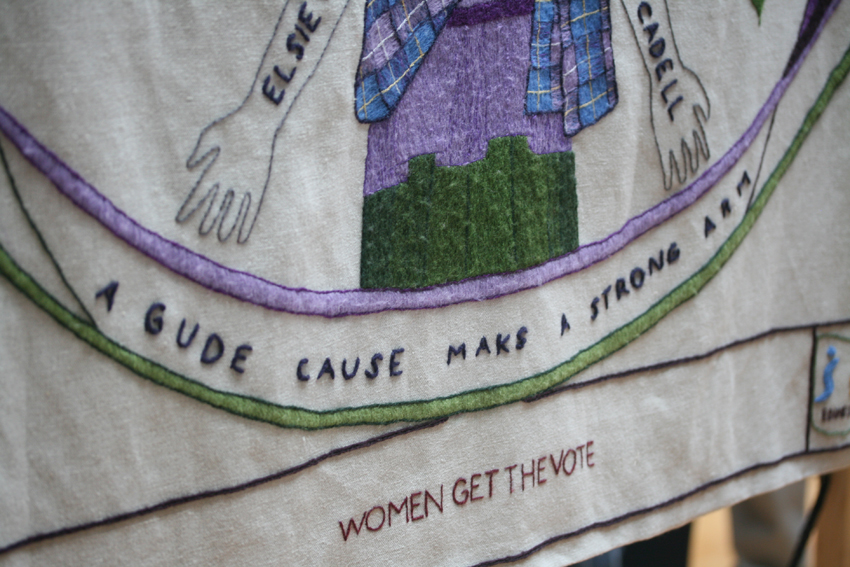 Panel 123: Women get the vote. This panel was stitched by the Edinburgh members of Soroptimist International