Morning! As we are well ahead of ourselves with the preparation of the Inspired by Islay book, Tom and I took yesterday afternoon off and went out to Glen Etive. On the way I got Tom to stop above the Bridge of Orchy, so I could take some photos of his Oa Hoody — I thought you might like to see this design in a different size and colourway.

Tom’s Oa is knitted in shades Squall and Highland Coo, with the latter being used for contrast throughout (there’s no third contrast shade as in my version).

He’s wearing it in the fourth size, with three inches of positive ease at the chest, and layers underneath.

I love my Oa for walking in – it is an extremely cosy outdoor sweater. Tom also finds his both warm and windproof.

But you have to put the hood up to keep a biting wind from out of your ears!

The decreases are worked on each side of the marker in the contrast shade in the opposite direction to most raglans. This shift in direction makes for the neatest posible shaping line, and minimises any disruption to the pattern.

This is one of my favourite designs from the Islay collection, and it has been making me very happy to see everyone’s projects springing up on Ravelry. JoshMoll recently knitted a beautiful version using Holst Garn in place of Buachaille, and I love jdonze’s short-sleeved modification. With Tom’s hoody, the only modification was to knit the colourwork in two shades rather than three, but I do think that the rich autumnal palette of Squall and Coo makes it look like quite a different garment.

I have no doubt that you will have noticed the transformative effect of the beard on Tom’s appearance and am personally quite happy to say that its days are numbered. The beard will disappear after the Bressay Up Helly Aa at the end of this month, though without the ceremonial burning that accompanies the end of the Jarl Squad Galley. To close, here are some photographs that Tom shot in Glen Etive yesterday.

Stob a Ghlais Choire, above the River Etive. . . .

And Buachaille Etive Mòr, the mighty peak after which we named our yarn! 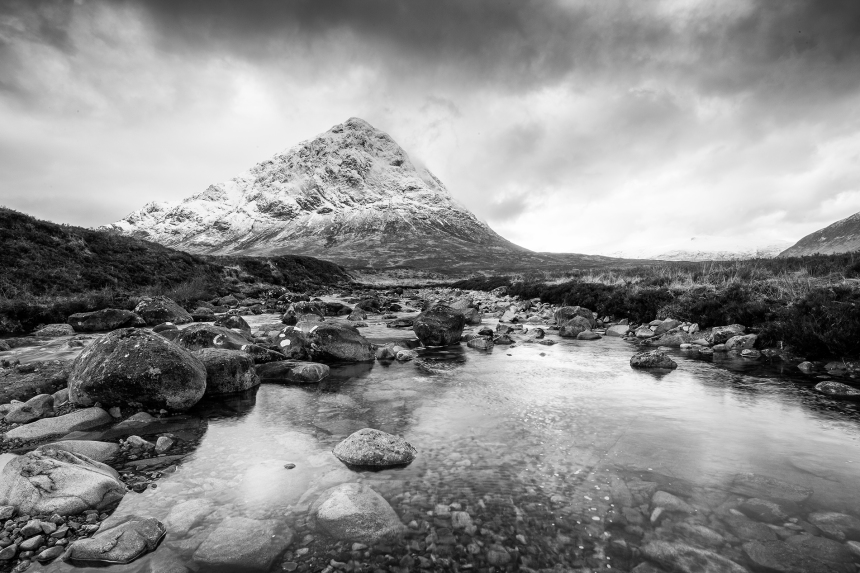